It is the dawn of a revolution: autonomous agriculture will change the way we grow fruit, plants and vegetables. Here is Angus, the first robotic farm. 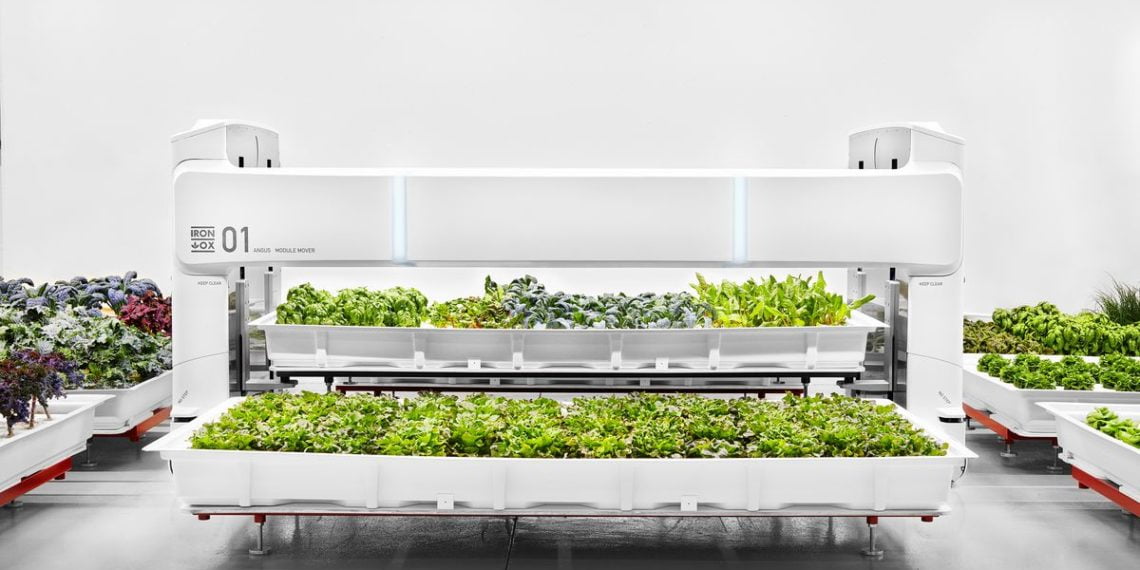 For centuries, farmers have harnessed the bounty of the Earth with oxen and plows. Eventually, grass-fed energy gave way to coal and oil-fed steel workhorses in a new era of agricultural efficiency.

Now, the rays of light of a new agricultural dawn are illuminating the bucolic horizon: a robotic garden. What can I say, a totally autonomous robotic farm run by machines under the orders of an artificial agronomist intelligence.

The symbol of the coming revolution, autonomous agriculture, is a robot from the Iron ox called Angus. Angus' job on the robotic "farm" (which is currently a test warehouse in Silicon Valley) is to transport 450-pound trays of green leafy vegetables that grow in a perfectly balanced hydroponic bath.

Angus travels through the Iron Ox warehouse lifting the trays with his powerful robotic arms that can plant crops, add nutrients, transplant, collect and finally pack the fruits of nature.

Angus is not just a simple robot farmer, Angus is the appendix of an entire system of sensors and software controlled by the "Brain".

"The Brain" is a computer, or rather a central intelligence that monitors and coordinates the entire operation, from Angus' actions to the levels of nourishment in the trays.

Everything is part of Iron Ox's plan: to build a hyper-efficient robotic farm for every urban center and wherever food consumption is concentrated.

By identifying the autonomous farms closest to consumption, the fuel and labor costs necessary to move the plants from point A to point B are already reduced.

But Iron Ox is also setting new standards in terms of productivity. His robotic farm is about five times more productive than a traditional farm.

Iron Ox monitors every single aspect of the growth cycle on the robotic farm.

Plants are given the right amount of space, sun (the warehouse allows natural light to enter) and nutrients to grow. Computers can operate 24 hours a day, 24 days a week, and therefore the plants are constantly monitored and conditions are adapted to optimize growth.

With the help of machine learning algorithms, each additional crop improves the ability of the "Brain" to grow the next crop.

And the "terminal" Angus? At the end of the day he retires exhausted to his hut and... no, I'm kidding. Angus doesn't need to eat, sleep or pick some potatoes to make a soup.

Iron Ox is not the only company that brings autonomous agriculture and robotic farm to the city. There are already dozens of startups developing their vision of urban agriculture. Indoor agriculture is expected to be a $ 40 billion industry within a decade.

I already told you about the vertical robotic farm that in Singapore "Sprinkles" walls full of plants with LED lights.

Then there are aquaponic farms that raise fish and grow vegetables in a circular system: fish eat and fertilize plants, and plants filter water for fish.

There is a lot of talk about highways, but agricultural fields will be the first to host the widespread raids of advanced autonomous vehicles.

We will have everywhere "robot pickers“, Autonomous planters, sprayers and harvesters that trace daily routes and interventions based on data collected from autonomous drones flying over fields and other sensors in real time.

Tractors are warned: their reign has also come to an end.

Syd Mead has not only "seen" the future in many ways, but has helped build it. Leave us one of ...