An exoplanet with extraordinary characteristics could be completely covered by oceans, with water over 30% of its mass. 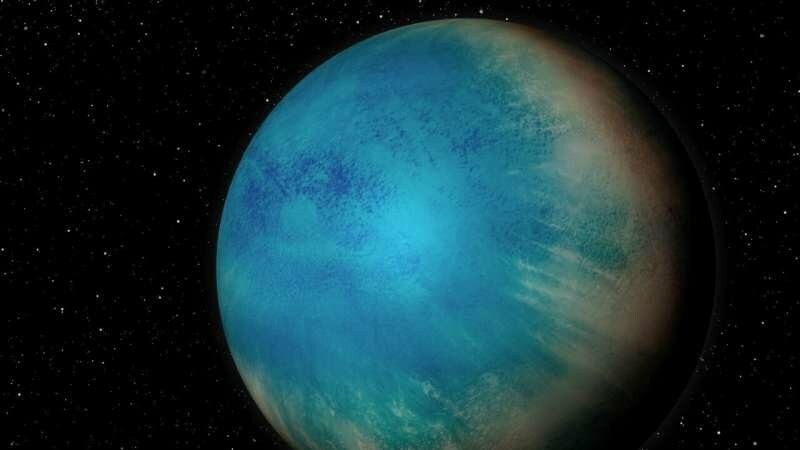 Artist's impression of the exoplanet TOI-1452 b, a small planet that could be entirely covered by a deep ocean. Credits: Benoit Gougeon, Université de Montréal

An international research team, led by the PhD student of the Université de Montréal Charles Cadieux announced the identification of TOI-1452b, an exoplanet that orbits one of two nearby stars in a binary system located in the constellation of Draco about 100 light-years from Earth.

The exoplanet is somewhat larger in size and mass than the Earth, and is located at a distance from its star that does not expose it to blistering heat or bitter cold. Astronomers believe it may be an "ocean exoplanet," a world enveloped in a thick layer of liquid water.

In an article published yesterday on The Astronomical Journal (I link it here), Cadieux and his team describe the observations that have elucidated the nature and characteristics of this unique exoplanet.

It was the space telescope TESS of NASA, not new to this kind of discovery, to put researchers on the trail of this exoplanet. Based on the TESS signal, astronomers predicted a planet about 70% larger than the Earth. To determine its mass (5 times that of the Earth) the system was observed with spired, an instrument installed on the Canada-France-Hawaii telescope in Hawaii ideal for studying low-mass stars such as TOI-1452, because it operates in the infrared spectrum, where these stars are brightest.

The exoplanet TOI-1452 b may be as rocky as the Earth, but its radius, mass and density indicate many differences. It is a world of water, not like ours: although the Earth is often referred to as "the Blue Planet" (water covers 70% of its surface), it is not taken into account that this water constitutes less than 1 % of its total mass.

On other worlds (water, we understand, it's practically everywhere), there could be much more. In recent years, astronomers have identified and determined the radius and mass of many exoplanets with a size between that of Earth and that of Neptune (about 3,8 times larger than Earth). Some of these have a density that can only be explained if a large part of their mass is made up of water. These hypothetical worlds have been dubbed "ocean planets". Just a year ago the discovery of Nu 2 Lupi d started the hunt.

The analysis of TOI-1452 shows even more important data: Mykhaylo Plotnykov e Diana Valencia of the University of Toronto are specialists in modeling the composition of an exoplanet. Their observation shows that water can constitute up to 30% of its mass, a similar proportion to that of some natural satellites of our Solar System such as the moons of Jupiter Ganymede and Callisto, or the moons of Saturn Titan and Enceladus .

An exoplanet like TOI-1452 b is a perfect candidate for further observations with the James Webb Space Telescope, which has already "hit the mark" with a "waterworld" discovered shortly after taking service.

It is close enough to Earth that we can study its atmosphere and test this hypothesis.

"Our observations with the Webb telescope will be essential to better understand TOI-1452 b," says Doyon. "As soon as possible, we will book time on Webb to observe this strange and wonderful world."

For some time, experts have been saying that James Webb will discover alien life within 5-10 years. If we're particularly lucky, we could have confirmations much, much sooner.