Combining public and private transport with a "super stop" that also contains ride sharing services: this concept is a show. 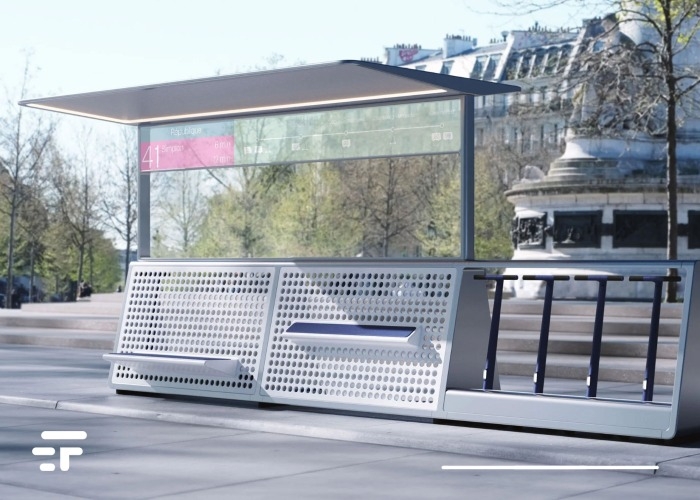 Last week I introduced you to the Futur Mobility Competition, a very interesting prize for the best concepts related to future transport. I did it with Abacus, a futuristic "tram" intended to connect cities and rural areas of Germany. Fantastic solutions abound, and today we take a leap to France, with an even more intriguing concept developed by the design studio Unknown Untitled (yes, that's exactly what it's called).

It's called Micro Mobility Shelter, and it's a scooter sharing service designed for Paris. What is its peculiarity? It is designed to use each bus stop as storage points for electric scooters. What is the goal? “Combining public transport and micro-mobility solutions into a coherent project to clean up pavements and improve the way micro-mobility vehicles are picked up and returned,” the proposal reads.

The idea is that of a network made up of new bus shelters, developed in order to "hide" the escooters in an orderly and discreet way when they are parked. And the convenience is that of being able to stop and deliver the vehicle at any stop in the city: a solution that increases flexibility and reduces costs.

It goes without saying that everything passes through the next-generation bus stop: a hub equipped with electric charging stations, and with a shape cut out around that of the e-scooters.

The triangular profile of the stop exactly follows the angle of the handlebar attachment of electric vehicles, to optimize space. The same structure, of course, also provides a comfortable seat for all those waiting to get on the bus.

A synergy of design and function

Even the escooters of this ride sharing concept are designed to integrate perfectly with the project (otherwise what would "System" be?) The scooters are equipped with three wheels, two front and one rear, to ensure stability and safety, and have a reduced length to have a better footprint.

In the last five years, bike / scooter sharing services have invaded the streets and cluttered the sidewalks, sometimes also creating inconvenience for pedestrians (and certainly not improving the urban decor).

The boom of companies that have entered the business quickly led to speculation that invaded historic centers: a situation that, already in its embryonic stage, requires regulation.

The French capital is at the forefront of micro-mobility: the Plan Velo it will give it a two-wheeled road system envied throughout Europe, and even the regulations on e-scooters have been implemented in an impeccable way.

This does not mean that the drawbacks remain. There are parking spaces assigned to escooters, battery swap programs and new charging stations, but they are not enough. Growth is dizzying: in 2030 private cars will be drastically reduced by cycle paths and traffic bans, and will be able to circulate at 30km per hour. It is necessary to prepare to change skin by welcoming the new means of transport, and by partially modifying the aesthetics and organization of the spaces.

Thinking of the bus stop as a hub is an idea already used for other purposes (for example for purify the air or favor the restocking of bees), but this seems to me the best interpretation in terms of synergy between public and private transport.

This charging hub is the basic unit of a gentle revolution. A redesign that will not change the look of our places. Paris (like other European cities) would not see its grand boulevards transformed, nor its narrow medieval streets.

Simply, with a concept of this type it would reuse an existing meeting point to enrich it with a modular microarchitecture system.

It's my favorite face of the future: green, versatile, human.

Here are the COMEDD glasses Try to imagine a mechanic with greasy hands trying to leaf through ...

The computer becomes a puzzle