An easy design exercise: imagine an icon like the Vespa in its future design. A talented designer tried it: here is the result.

A concept designer tries to imagine the famous two-wheeled symbol of the Piaggio in an evolution of very long breath.

"What will a Vespa of the future look like in a hundred years?". I admit it, it's not the kind of question I usually ask myself, but now that the designer Artem Smirnov tried to give an answer I was taken by the same fascination.

Next year, in 2021, it will be exactly 75 years since the legendary engineer Corradino D'Ascanio (a genius lent to mobility from the aviation sector) designed this masterpiece.

A masterpiece of style, simplicity and functionality. Timeless. Yet time passes for everyone, and even if after three quarters of a century the Vespa has not lost its polish, certain developments are inevitable.

Smirnov simply asked himself how to take the values ​​of the Vespa brand and bring them up to 2120.

The Vespa of the future

Smirnov really got busy. His next generation of Vespa is truly perplexing, a sign of originality. That said, at least I do not know absolutely anything that even remotely resembles a current wasp.

On the other hand, even today's cars don't look anything like those of the 20s, so it is theoretically acceptable for a new generation Vespa to be radically different.

Conceptually, there are interesting elements. First of all the format: it is clearly a hybrid between a scooter (of which it maintains comfortable legroom) and one e-bike, from which it seems to inherit lightness and agility.

The wide and comfortable seat rests directly on the rear suspension, while the Vespa logo on the front plays a double role: it is a brand but it is also the vehicle's headlight.

Of course, overall the vehicle still keeps the curves in the right places. You can still imagine a future in which the new generation Vespa will be very cool, even if less than the current one.

What are you saying? 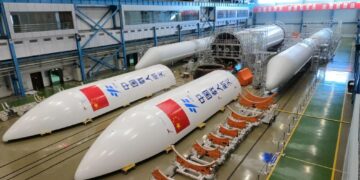 Among the projects being studied in the wake of recent achievements, China has that of a huge assembled spacecraft ...