The gym of the future? Digital, connected and ... at home. Covid has accelerated an already present trend by 3-5 years. JaxJox is the latest example. 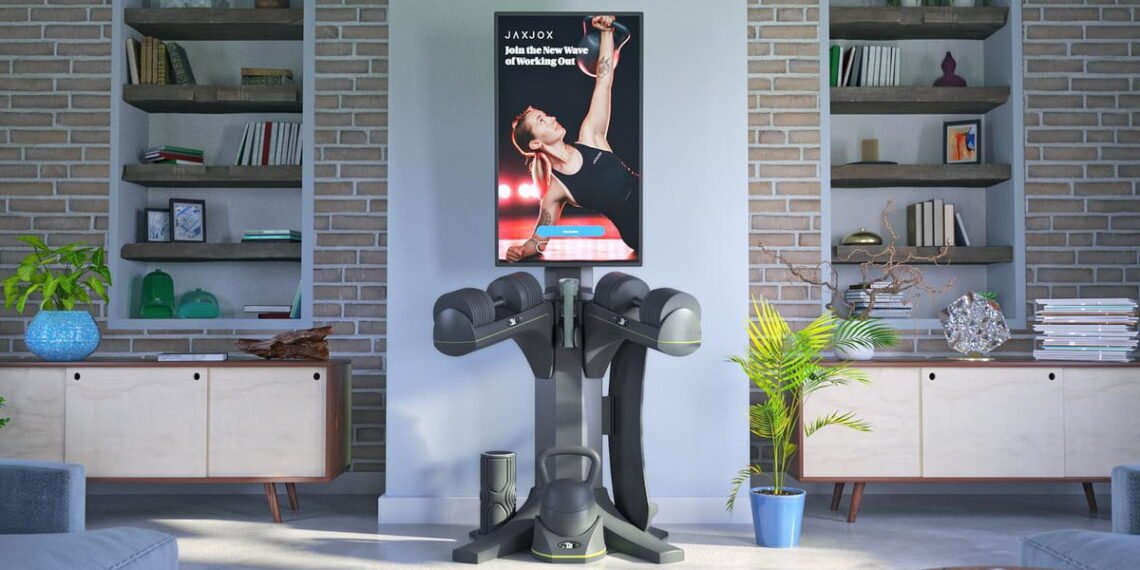 After Peloton for the exercise bike, JaxJox takes a step forward by offering an all-in-one home gym.

In essence, the situation means that a piece of exercise equipment often forgotten in a corner gives way to a piece of high-tech “must have” like an iPhone. Why the boom in fitness technologies? Since its founding in 2012, Peloton has achieved a market capitalization of over $ 37 billion and a level of ubiquity that makes it a touchstone in fitness circles. If JaxJox manages to capture a similar slice of the market, it will turn the tables on the gym of the future.

JaxJox promises "a 360 degree fitness experience". The founder the company, Stephen Owusu is enthusiastic about the force monitoring concept developed by his company. In the gold rush to quantify every outdoor fitness activity, from jogging to swimming to cycling, no one has yet managed to do strength tracking convincingly, he says.

“Everyone who uses a dumbbell today is just picking up a dumbbell, doing some reps that matter in their head, and that's it. There are no dumbbells on the market that can monitor strength, except those from JaxJox ”.

JaxJox's solution is a paradigm of what indoor fitness of the “gym of the future” can become: a blend of intelligent hardware and software. At CES 2019 he presented his KettlebellConnect. It's a smart kettlebell that packs a gyroscope, accelerometer, and five different weights that connect through an intelligent automated locking system.

Today, JaxJox is ready for the big leap: a complete home gym setup that boasts a 43-inch touch TV and a set of smart, coordinated gear. The full package, currently available for pre-order with first shipments in December 2020, is astronomical compared to that of a gym. If we take as a reference a gym that costs € 50 per month of registration, it is the equivalent of 3 years. $ 2.199. To these, a subscription fee of $ 39 per month must be added. And this brings me to the next reflection.

The gym is evolving

If, a few years ago, you wanted to build your home gym, you had to buy a lot of equipment - maybe three or five or eight different dumbbells, some kettlebells, a number of other things. It would take a lot of space. Many have given up, many have bought few things, many have set them aside. Gym of the future also means versatility, and these tools provide us with a sage. One DumbbellConnect has 14 dumbbells in one unit. A KettlebellConnect has six kettlebells in one unit. These are mechanical, which at present would not withstand mass use like that of a gym. But for a family they are something very solid.

Either way, of course, a handlebar is a handlebar. And most of them cost a lot less than what JaxJox claims. As clear as the idea of ​​several dumbbells in one unit may be, that's not the big selling point. The real value proposition is in the software. This is what could make JaxJox a winner in a very competitive market. The future is to offer users not only monitoring, but also personal coaching.

The JaxJox algorithm is built in such a way that it doesn't just take data when using a tool. If you go for a walk, or even if you sleep, the system collects the data and uses it to organize the user's physique. He can recommend a full day of rest, or a greater or lesser load, always obtaining the maximum result, at the best time. A kind of body Spotify.

The model will also allow for on-demand (or live streaming) sessions of daily lessons to cover everything from cardio to proper physical recovery. In other words, an entire temple of the physicist brought directly home.

End of the gyms?

I don't expect gyms to die, but that more and more people will exercise more elsewhere. This yes. And the most popular gym of the future will be at home. The most recent trigger is, of course, the COVID-19 pandemic. As places where large numbers of people gather and share equipment, gyms have been temporarily closed in many parts of the world. Many more people now work from home, which means they probably exercise at home too. Add to that the boom in subscription service spending and JaxJox's business model is starting to make sense.

However, I believe that, as with other things, the coronavirus has not changed so much the way in which physical fitness is treated, but has accelerated the processes in place. The trend towards networked products was already there. Covid simply accelerated it. On balance, anticipating the future by three, maybe five years.

And it is a circle that closes formidably, if you think about it. Technology has allowed us to carry out incalculable productivity tasks without moving from our desks. The solution to all this inaction? More technology, whether it's a smartwatch that tells us to get up and move at regular intervals or a screen that guides us through the exercise.

It's a weird new world of fitness, sure. But don't underestimate it: this is the gym of the future.

When over the past 5 years we have reported on the DARPA robotic arm (if you feel like it, the ...