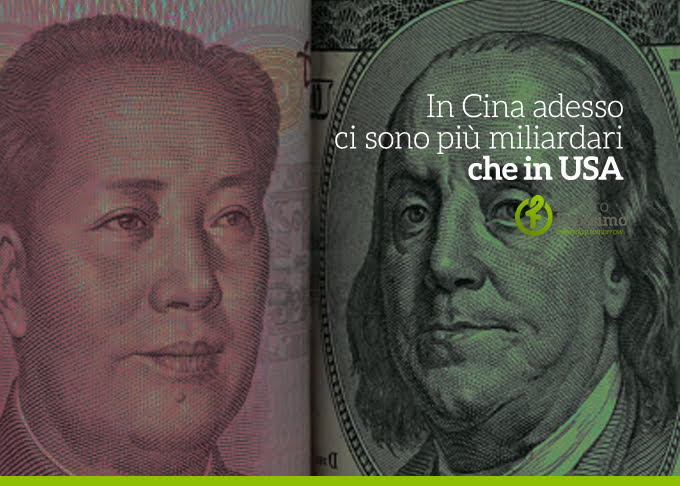 For the first time in history, the number of billionaires in China exceeds that of the United States.

With its 596 billionaires (who only grew at the rate of 5 new a week last year), the country of the red lanterns today surpasses that of Uncle Sam, standing at 537.

If we also counted the other countries of "Greater China" (Hong Kong among all) there would be no more game, with a total of 715 billionaires.

"China is now officially the most profitable country for those who want to do business," says Rupert Hoogewerf, author of the comparative study on behalf of the Hurun Research Institute, which every year draws up a "world list of the rich" (here is the one from 2015). “It is only the first phase towards a very rapid overtaking also in terms of Gross Domestic Product”. Currently, China's GDP is larger than that of India and Russia combined.

Remaining in the internal ranking, the new richest "comrade" is 61-year-old Wang Jianlin, head of the construction group Wanda. Outclass the old leader of the rankings, 51-year-old Jack Ma, founder of the Alibaba portal. Other notable data: ultra-rich women are 20% of the total, and 188 Chinese billionaires are under 40.

Identified the missing piece in the circuit that allows natural light to influence our life. It will be possible to develop a ...