A group of Stanford engineers and the professional chef Eric Minnich they founded a startup that aims to automate street food. Mezli, this is the name of the new company, is creating modular restaurants: they look like giant versions of vending machines, but in reality they are units inside which robots prepare food. A technology that, according to entrepreneurs, reduces production costs and will produce a real invasion. Mezli plans to open more than a thousand of these robotic factories in the United States.

Alex Kolchinsky, one of the founders of Mezli, began thinking about a solution for providing low-cost meals on college campuses. He and his associates concluded that the key problems of small restaurants and cafes were the need to pay for staff and the rent of the property.

A $ 10 plate actually costs $ 3 if you only count the food. The rest of the money is spent on labor costs, overheads and rent. But if we build autonomous restaurants, we can lower the prices and keep the food great.

Widespread and robotic restaurants: how do you see them?

Since then, startup Mezli has built a modular restaurant prototype that has been set up in San Mateo, California. The system has already proven its effectiveness in testing: no people are needed to operate each of these units. All a human operator has to do is load the semi-finished products and beverages into the system.

At least you eat well?

Mezli robotic restaurants focus on Mediterranean cuisine and offer bowls with different fillings starting at $ 5 per serving. Visitors can place an order via the mobile app or at the display placed in front of the unit. The collection takes place on site, from a sort of smart locker like those of the Amazon hubs. According to Kaczynski, about 44% of customers who try Mezli's dishes become regulars of modular restaurants.

The launch pad is now expected third prototype, ready in early 2022. So far, investors have allocated over $ 3 million to develop Mezli's businesses. In the next few years, the startup plans to mass-produce the robotic restaurants by 3D printing them and placing them virtually anywhere.

“We are planning to expand to several new locations by starting mass production. We expect to open 1.000 locations faster than any other restaurant thanks to our method, ”says Kolczynski.

Will McDonald's of the new century be run by robots? 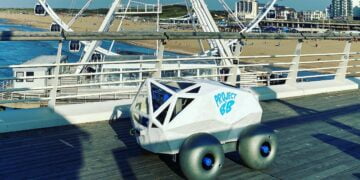