The restart of Serie A puts us in front of a near future of matches without spectators. Yamaha creates Remote Cheerer, an app for remote cheering.

It was yesterday the news that the Minister of Sport Vincenzo Spadafora has set a date for the restart of Italian football. You leave in empty stadiums, and a little sadness for this show that seems to “have” to go on. Even this situation, however, allows us to note that there are those who have sharpened their wits by still innovating in the field of remote interaction.

And yes, because the fear of another wave of coronavirus cases keeps the stadiums closed to the public, and the restart also for Serie A. a team that is supporting it. Yamaha Remote Cheerer seems to have found a way to allow fans to feel present, and give players the feeling that the stands are full.

What's this? Remote Cheerer is essentially a smartphone app that broadcasts sound effects within a stadium. The software allows users to choose which system to sit in virtually, and to activate cheers, cheers or other sounds at the touch of a button. The app then sends these noises to one of the 58 speakers located around the pitch.

Yamaha has just conducted system tests at the Japanese Shizuoka stadium in a football game between Júbilo Iwata and Shimizu S-Pulse.

"With spectator-free matches and support restrictions, this system can encourage players on the pitch by making them feel like they have fans nearby.", said the Jubilo representative Hiromi Yanagihara. "Our club will implement the system at future events."

Yamaha does not yet have dates for implementation in other stadiums. But one thing is certain: even after the return to "normality" the system can have applications, in addition to events without spectators.

"We are working to promote this system as a means of offering fan cheering and support in a wide variety of situations," said Yuki seto by Yamaha. "The scenarios are many: matches without spectators, but also matches with reduced seats, or bans to visiting teams, etc.". Remote Cheerer can also serve as a stimulus for fans who are at the stadium, perhaps colder than those who would like to encourage at home.

Check out the video: https://youtu.be/ZsWKaM5bmQs

Will we also see it in Italy?

It remains to be seen if something like this will take hold in the United States or in Italy for the restart of Serie A. I have my good doubts. Let's just say that I am sure that it will not even be taken into consideration. But in Germany, where to replace the fans they have put cardboard shapes in the stands, this could arouse interest.

However, it remains an interesting application of technology. One day it could enrich the experience of future spectators who will attend events with a viewer in virtual reality. 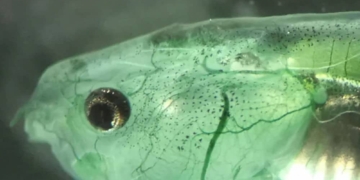 A German team keeps the brain cells of a tadpole alive by injecting algae into its brain: this ...