A sprig, a pine cone, a log of wood: camping is technological if you can cook and even feed the devices with a fire. Here is PureFlame

PureFlame mini is a camping stove capable of keeping your devices in charge away from the mains thanks to its ability to transform heat into electricity.

The idea behind PureFlame is simple: you look around for a pine cone, a few twigs, the classic things found around to light the fire (always biomass, I recommend you don't burn things).

The thermoelectric generator converts heat into electricity (a part of which is reused to help the fire itself remain lit and stable, so as to feed stably or devices).

With two small internal turbines, the system (just a little bigger than an apple and equally heavy) also releases more than 3KW of thermal energy when the fire is lit.

It's not a little, it can boil 1 liter of water in just 4 minutes.

PureFlame mini is equipped with a 2400 mAh rechargeable lithium battery, with a USB port to be used to power what you want.

The first reservations, started this week on the crowdfunding site Indiegogo, set the price around 72 €. Shipments will be made from December 2019.

Check out this demonstration video:

In short, the green wave also overwhelms habits that previously seemed almost detached from technology. I already told you long ago about Biolite CampStove 2, but PureFlame is an even more Spartan and ecological evolution of it.

The sustainability of these solutions allows not only to provide for the most pressing needs, but to solve a whole series of problems that only have a way out in technology.

The compact design means that this cooking-supplying system can be kept very comfortably in a backpack.

Electricity is becoming more and more outdoors, free from networks, as we should be. 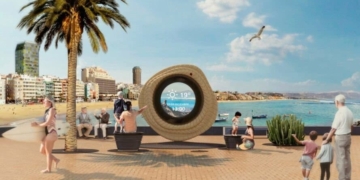 This is how a contemporary tourist attraction for small towns is designed: People love these unique blends of art and ...

The first electric wingsuit is from the Guinness Book of Records