In the right place with the right tools: Perseverance finds more organic matter and perhaps evidence of life on the red planet. 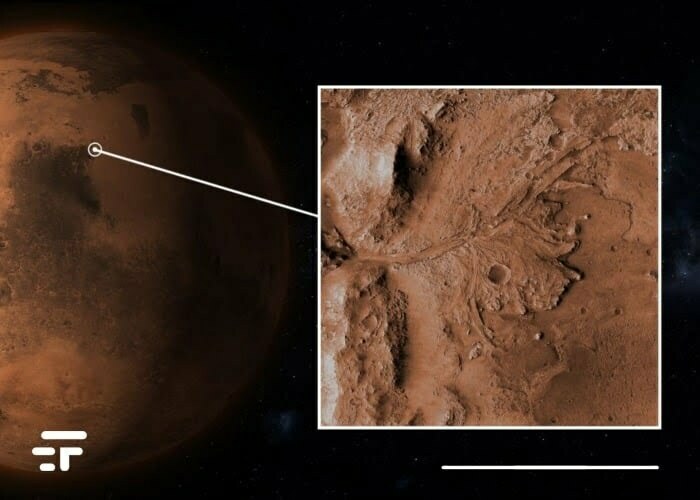 NASA's Perseverance Mars researchers announced today that the rover has collected several interesting rock samples containing organic matter from an ancient river delta on Mars. The rover has now stored these samples for a future mission where it is planned to retrieve them and return them to Earth (that would be a first).

In yesterday's press conference the scientist of the Perseverance project, Ken Farley, he was beaming. "These rocks showed us the highest concentration of organic matter we have found so far on our mission. And it's really interesting since organic molecules are the building blocks of life."

Although both the Perseverance and Curiosity rovers found organics on Mars, they are the first to be found in an area that featured potential sediment and salt deposits from a long ago lake where conditions could have supported life.

With the four samples collected in the delta, which scientists believe is a former lake bottom, the rover has now collected a total of 12 samples. You can see more details on each sample on this NASA website.

Jezero, a good place to look for organic matter

The landing site of the rover, Jezero Crater I have already told you about here, is home to this fan-shaped delta formed about 3,5 billion years ago, in what appears to be the convergence of a Martian river and a lake.

On July 20, the rover abraded part of the crater's surface so that it could analyze the area with the instrument called Scanning Habitable Environments with Raman & Luminescence for Organics & Chemicals (for SHERLOC friends).

What SHERLOC's analysis found is that the samples contain a class of organic molecules related to those of sulfate minerals. A discovery that can provide significant information on the aqueous environments in which they formed.

"Personally," says scientist SHERLOC Sunanda Sharma, "I find these results fantastic. It seems we are in the right place with the right tools at a very crucial time."

Was there life on Mars?

There are chemical processes that produce these molecules that do not require life, but the presence of these specific organic molecules is considered a potential bio-signature. A substance or structure that could be evidence of past life on the Red Planet.

I would not be in the skin if I were a Mars Sample Return researcher: this mission will be of crucial importance in our knowledge of the cosmos.

The plans are to land near or in Jezero Crater, carrying a small rocket onto which the samples collected by Perseverance would be loaded. Two helicopters similar to Ingenuity would provide a secondary ability to retrieve other samples. At that point, another spacecraft would capture the rocket with the samples in Mars orbit and then bring it back to Earth, perhaps from the beginning to the mid-30s.

In summary, within a decade, we will have a perhaps definitive answer to a question that we have been carrying with us for over a century.