The official confirmation from the Jezero crater opens up new perspectives of the search for extraterrestrial life (present or past) on the red planet. 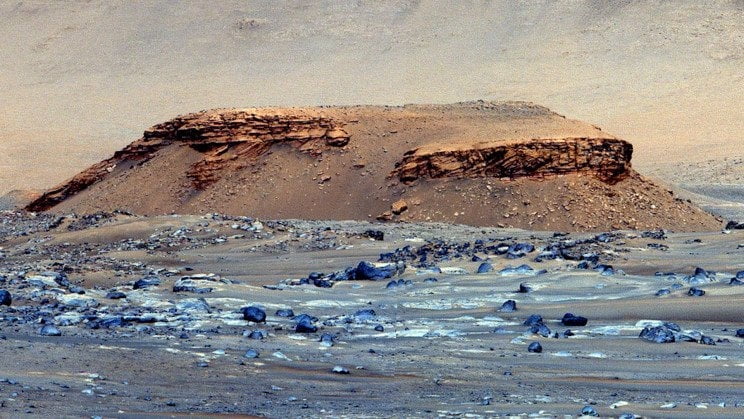 Using images taken by NASA's Mars Perseverance rover, the researchers found that the landing site, Jezero Crater, was a large lake fed by a small river 3,7 billion years ago.

The new analysis confirms the theory that led NASA to choose Jezero crater as the landing site for Mars Perseverance. Sediments found in the bottom of the ancient crater lake can be used to detect traces of ancient life on the red planet.

A river and a lake

The scholars' analysis clearly shows that the west wall of the crater is a large dune field formed by a river that once flowed into a nearby valley. The river fed a once liquid lake on Mars's Jezero crater.

Scientists, who published their analysis in the journal Science, they also revealed that flash floods occurred in the now desolate region. "If you look at these images, you are practically staring at a desert landscape," he explained Benjamin Weiss, professor of planetary sciences at MIT and member of the analysis team.

There isn't a drop of water anywhere, yet here we have evidence of a very different past. Something very profound has happened in the history of the planet.

Perseverance's choice to land in a spot called Jezero Crater was functional. The NASA team had estimated from images received in February that the rock formations within it looked like those found in places that once housed a stream. The new images, captured by Perseverance's Mastcam-Z and SuperCam Remote Micro-Imager (RMI) cameras, confirm that the western side of Jezero Crater it was once the site of a river delta.

The new MIT study explains that the lake remained calm for long periods until climate change caused flash flooding in the region. According to the researchers, the floods carried large boulders tens of miles from higher altitudes to the lake floor where they still exist today.

Next, Perseverance will look for locations from which to collect samples that will eventually be returned to Earth by future missions. Once on Earth, these samples will be analyzed for any signs of ancient Martian life. "We now have the opportunity to search for fossils," says the team member Tanja Bosak, associate professor of geobiology at MIT. "It will take some time to get to the rocks that we really hope to try for signs of life. So, it's a marathon, with a lot of potential."

Close to a historical discovery

Since it landed on the Jezero crater on February 18, the mission Mars perseverance has successfully ticked off a list of historical records, including the first controlled flight on another planet e the first extraction of breathable oxygen from the red planet using an experimental tool called MOXI.

The Perseverance rover will spend at least two years exploring and sampling Jezero Crater. It will drop samples in specific locations on the red planet for future missions to Mars to be recovered and returned to Earth. We could be incredibly close to confirming the existence of alien life (albeit perhaps in the form of long-dead microorganisms)

A discovery that will change our understanding and perception of the universe.