Heat waves, Los Angeles covered a piece of the city with reflective paint, and it's working

The "reflective paint" project was designed to reduce the temperature of the city's streets, playgrounds and car parks by 10 degrees. 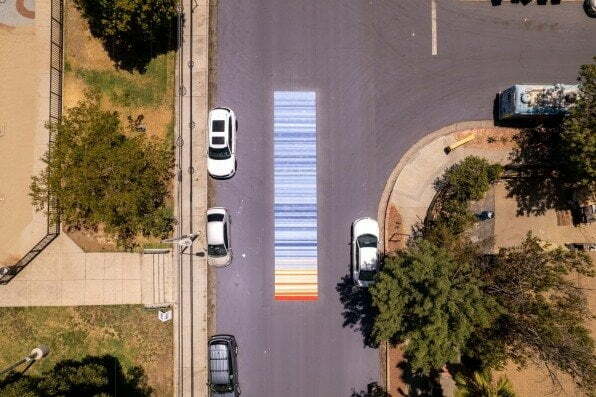 It's no secret that cities are warmer than countryside: fewer trees offer less shade, and concentrated human activity absorbs heat, which is absorbed by surfaces such as sidewalks and parking lots.

Some cities have turned public facilities into climate shelters, others have planted thousands of trees to combat the so-called "heat island" effect. Los Angeles chose another approach: coating an entire neighborhood in reflective paint.

Hit it up with the brush

The team behind the GAF Cool Community Project (this is the name of the project) has just finished painting around 92000 square meters of streets, playgrounds and parking lots in the Pacoima neighborhood. The reflective paint has special additives that reflect infrared light, which means that the painted flooring ends up absorbing less heat.

Given the growing number of heat waves around the world, it is worthwhile to focus on solutions of this type as well. The surfaces of Pacoima treated with reflective paints they have temperatures even 10-12 degrees lower. It's time to take a closer look at this to see if scaling it up at a larger scale achieves even greater cooling, and that's precisely what the researchers will do in the coming months.

For now, the data is anecdotal: over the next two years, the company will collect weekly surface temperature data across the neighborhood and, if successful, replicate the model in other neighborhoods.

The core of the project: an "invisible" reflective paint

The absolute protagonist, you will imagine, is the reflective paint. It's called Invisible Shade, and it doesn't just reflect visible light (like white paint conventional) but also infrared (IR) light, which accounts for most of the heat.

Most surfaces have been painted a light shade of gray, but this reflective paint is available in 14 colors. For this a local artist was commissioned to design a series of colorful murals on a basketball court, a school yard and a parking lot.

The most interesting mural? It is called "warming stripes", and it depicts the annual temperature change in Los Angeles County from 1895 to 2021. Visual connection between people and context, awareness and solution to the problem.

If it works, let's get ready for a more colorful (and less warm) future.