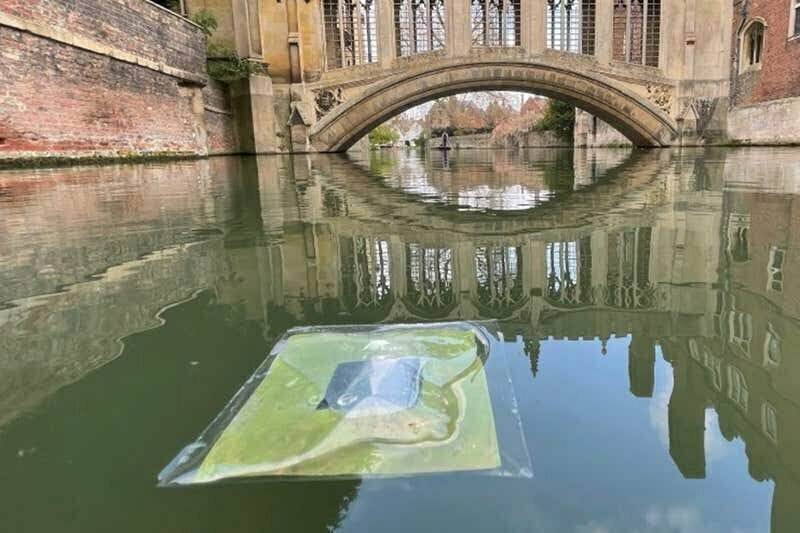 The artificial 'leaf' during tests on the River Cam in Cambridge

A fairly light artificial leaf that uses sunlight to create fuel could be used to end the scarcity of land available to absorb solar energy, and the abuse of land that would otherwise be usable for agriculture (albeit goes strong).

Unlike photovoltaics, solar cells convert sunlight into fuel rather than electricity. Researchers have long sought to replicate photosynthesis in plants with a synthetic process that uses carbon dioxide, water and sunlight to produce fuel. Today, however, existing technology is still inefficient or too complicated, so much so that it is confined to the mainland, where space is limited.

Erwin Reisner from the University of Cambridge and his colleagues developed a solar fuel cell made with lead perovskite, a type of crystal capable of capturing energy from light. The cell produces bubbles of hydrogen and carbon monoxide, which can be mixed together to form a fuel called syngas. The study was published in the journal Nature, and I link it here.

"It's the first of its kind for solar fuel," says Reisner.

There are many significant developments for floating PV as well, and we simply thought that something very similar could be done for fuels as well.

The prototype of the device is a square 10 centimeters wide and one millimeter thick. In tests conducted on the River Cam in Cambridge, it produced hydrogen with an efficiency of 0,58% and carbon monoxide with an efficiency of 0,0053%. According to Reisner, when compared gram for gram, its performance was very similar to current solar cells.

How is this kind of water lily made?

The manufacturing process, which as mentioned involves the deposition of a thin film of perovskite on indium and tin-coated polyester, is easily scalable, but there are still some problems. Two out of all, in my opinion not insignificant: first, the efficiency must be closer to 10% for commercial applications. Second, even if they are integrated into the device, the materials used in the prototype could potentially be toxic to waterways.

This clearly does not detract from the importance of the discovery: this artificial leaf, although still “unripe”, is a great proof of concept for future commercial devices.