The signal picked up by the FAST telescope made Chinese scientists jump from their chairs, but it is too early for any conclusion.

During the week, the Chinese "Sky Eye" telescope picked up a curious signal that could come from extraterrestrial technology. At least that's what the Chinese newspaper reported Science and Technology Daily, before removing the article.

Ok. Well done. The head of the new China Extraterrestrial Civilization Research Group research project, prof. Zhang Tongjie, he had said it in January 2021: "We will be the first to find evidence of the existence of extraterrestrials," and he did.

We should be intrigued, but not too much. To determine whether a signal is truly from space or is simply the result of an unexpected source of earthly interference, it has to go through several checks.

But let's take a small step back first.

Officially known as FAST, (an acronym for Five-hundred-meter Aperture Spherical Telescope) with its 500 meters of width it is the largest and most sensitive single disc radio telescope in the world. An engineering marvel, whose gigantic structure is built in a natural basin in the mountains of Guizhou, China .

FAST is so large that it cannot be physically tilted, but can be directed in one direction through thousands of deformation actuators that bend its reflective surface. At that point the position of its focal point changes, and the telescope can observe a different section of the sky.

FAST detects radiation at radio wavelengths (up to 10cm) and is used for astronomical research in a wide range of areas. One of these is precisely the search for extraterrestrial intelligence, or SETI.

In the 60s, the American astronomer Frank Drake pointed to the Tatel telescope (it is tender to say it today, it was 26 meters wide) towards two nearby stars looking for signs of technology. Since then, research on the 'technological signatures' of aliens was born: the 'collateral' signals that would demonstrate the presence of advanced civilizations on other planets (and therefore of technologies, or even of pollution).

Regardless of whoever is following closely the interesting series of meetings between the US Congress and the Pentagon (with UAP sightings attached), in these 60 years we have not yet found any final proof of life beyond the earth.

And yes, FAST is not a children's telescope. It follows 38 billion traces per second, which is processed by a group of super computers capable of producing detailed graphs of the analyzed signals. The traces thus obtained are then analyzed to look for "techno-signatures" that would show the presence of extraterrestrial civilizations.

Its sensitivity allows it in theory to pick up even a single radar signal from a nearby exoplanet. Doesn't he miss anything?

The problem is another. Indeed, the telescope itself.

The extraordinary sensitivity of FAST today also represents its limit. Capturing even very small signals increases the risk of being misled by human-made interference.

It has already happened on other telescopes: last year, for example, the researchers of the Murriyang telescope picked up a very special signal, which they called BLC1. Also on that occasion more than one expert jumped from his chair and perhaps got caught up in enthusiasm. And even on that occasion it turned out to be a strange interference, but definitely NOT alien.

It took a year, however, to figure it out. And scientists had to develop a new verification system. You see it here.

It takes time and more

As with BLC1, even with FAST it may take a while for the captured signal to be analyzed in depth.

To recognize it is the same professor Zhang Tongjie in the report he presented:

“The possibility that the suspicious signal is some sort of radio interference is also very high and needs to be further confirmed and ruled out. This could be a long process. "

And we may have to get used to a gap between looking for candidate signals and verifying them. FAST and other telescopes are likely to find many more signals of interest.

Most of these will turn out to be interference, but some may be new astrophysical phenomena and some may be technological signatures. in good faith. Maybe. In any case: calm down. 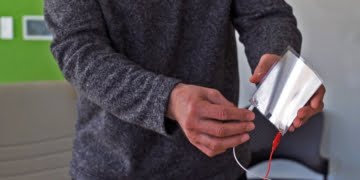