The addition of ultrasound can help eliminate arterial plaques completely, preventing them from re-forming. 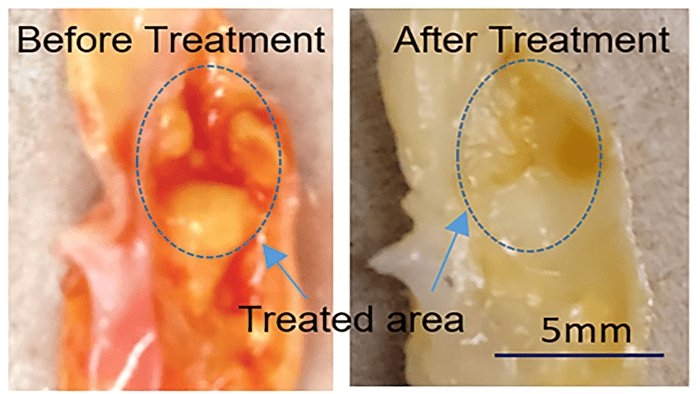 Tissue damaged by atherosclerosis before and after treatment with the new treatment that combines low-power laser pulses with ultrasound. Credits: Rohit Singh, University of Kansas.

Researchers at the University of Kansas have created a combination of laser and ultrasound that "vaporises" the cholesterol plaques in the arteries. The team estimates that, thanks to its ability to remove rather than compress the fatty deposits that line arteries due to atherosclerosis, this technology will also be able to prevent arterial plaques from re-forming.

The causes and treatment options for blocked arteries

When people lead an unhealthy lifestyle (excessive nutrition or lack of exercise), fatty deposits can form plaques in the inner walls of the arteries, causing atherosclerosis. Arterial plaques contain cholesterol, cellular waste, calcium, and a blood clot known as fibrin.

They cause all kinds of damage, and being asymptomatic in the early stages could take them by surprise with chest pain, breathlessness, coronary heart disease and even ictus o infarct.

Today, no treatment can reverse the narrowing of the arteries. It can only be prevented from worsening with medication and / or by changing lifestyle. When the arterial plaques have done too much damage, however, the only option is surgical: a "balloon" is applied to expand the artery and compress the plaque. A remedy that often causes relapses, because that "compressed" part of the arterial plaques attracts new fat deposits.

Arterial plaques, a laser to pulverize them

Among the procedures studied for the removal of arterial plaques, a new technique is the one called LCM, or Laser Capture Microdissection (laser microdissection), able to vaporize the cholesterol and debris attached to the arterial walls in atherosclerosis. A technique that presented problems, however, because the use of a powerful laser was not without side effects.

The new study led by researchers led by Rohit Singh of the University of Kansas (I link it here) showed a method that combines a low-power laser with ultrasound: and removes arterial plaques safely and efficiently.

The addition of ultrasound somewhat "mitigates" the power required by the laser, and this improves the picture.

How does the new plate 'vaporizer' work?

The first tests of the device were performed on samples of pork belly fat: this allowed to calibrate lasers and ultrasounds until the optimal parameters were obtained. In the second phase, the scientists worked on plaque samples collected directly from human patients.

The results? The study states that the new system doesn't simply compress arterial plaques - it destroys them. It reduces the rate of restenosis (the re-formation of plaques) compared to other methods, and generally reduces damage to the arteries.

Confirmations are needed on live subjects, of course, but the results of these first two phases really bode well. 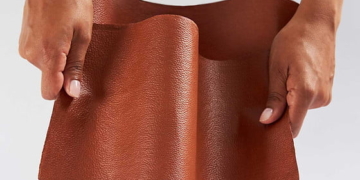 Alternatives to leathers are increasingly in demand, but to reduce emissions and exploitation of animals, the trump card is ...