The banning of Donald Trump from social media is the last act of a historical phase, and the dangerous first act of a dystopian future. We can avoid returning what we are: Olons.

The battle rages fast, and the feeling is that soon there will be a point of no return.

We know the long prologue well: the echoes of civil war resounded for years, the delegitimization of the opponent, the polarization of the population, the assault on the institutions, the "supranational" direction of social media. These are hours of reckoning, with operations halfway between safety protection and damnatio memoriae.

Social media, political outsiders in 2008 at the time of the first Obama, have become judges and deciders of wins and losses 12 years later. Social media have underlined their pivotal role in one of the most tumultuous periods in modern history. If this seems strange and unusual, it is because there is no historical precedent, neither in the media nor in this media management of a presidency.

“Never happened before,” he says Margaret O'Mara, historian specializing in the history of technology and politics, author and lecturer at the University of Washington.

Now, if Trump was certainly a completely sui generis president (with a tragic and dangerous ending), it must be said that even social media platforms have found themselves in a role for which they were not well designed.

They became political squares, but they weren't designed to be. Social media, even stones know, are designed to sell ads on the Internet.

We all remember that sort of optimism that took over us when we discovered that a virtual place could put us and get us back in touch with all our loved ones.

An instrument of comparison, dialogue, democracy, capable of uniting people.

Although social media platforms may still be a unifying force, this technology has shown the full potential of a platform to produce and promote violent acts, or insurrections, or consequences of an alternate and manipulated reality.

This is amply demonstrated by the events of last week, but also by the many "direct" of individual serial killers and mythomaniacs.

In many cases, the role of social media has been a weapon, an intermediary. Social media is at fault in what happened in such cases. They no doubt contributed to the distortion that produced these consequences.

A feed like Facebook's (but also applies to other platforms) is perfect for selling ads. It is an extraordinary, surprising business model. But it's a bad way to get the full spectrum of what's going on in the world.

For structural problems, in short, social media misinform. They confuse. They deform. And now they risk having deformed the society they host every day. The accusation launched against the "haters of the web" is as sterile as the one thrown at bulls in an arena, angry and then criminalized and shot down.

Social media: what will happen now?

The situation is paradoxical. Social media today aim to "catch up" after having favored the polarization of society and the spread of fake news and messages of hate. With the same disruptive force today they become (in spite of themselves?) Supranational ministries of truth and security. They decide to censor, and to cancel.

A domino effect that risks overturning the shape of things: in a few days, cascading, we are already witnessing today consequences expected only in some time.

In a nutshell, and that's just one of the detours I see: social media hunts or deletes people (Trump has actually been banned from Facebook, Twitter, Twitch, TikTok and others). People go to other social media (e.g. Parler). Companies kick out or delete entire social media (Apple Store and Google Store take Parler out of their apps). Total war.

Even with no precedent of what happened, the story provides some clues as to what might happen next.

Because a rule is needed

The technology sector has flourished in an environment of deregulation, but the past shows that there can also be a constructive role for regulation.

A possible future is already written, with all its consequences. It tells us that the great social generalists will lose ground, that there will be more social networks fragmented out of interest, perhaps out of political faith, and that one day a social network could be closed for terrorism.

Before this happens, however, a different future can be written, by defining a role for social media from the outset. Is it possible to redesign them ethically?

In a system that rewards profit and not values, how can a company that sells attention be prevented from generating pathological addiction in its "customers"?

If social media aims to give me only what I want to hear, it will cause me enormous damage. If it aims to impose on me what I have to hear or worse to say, even worse.

It is impossible for any entrepreneur to be the decision maker of what can or cannot be done or said. Absolutely excluded. It is also excluded that this entrepreneur should take responsibility for the fact that using his tools someone can evoke violence.

In the much acclaimed "green" revolutions, or in the revolts in Ukraine and Turkey, the regime's censorship of social media and social media was condemned. The regime itself had an easy life controlling the one-way media.

Ethics and law as a solution. Prohibition of concentration of social media platforms, and individual responsibility for content.

Democratize social media, therefore. Not easy, considering the system in which civil limits and state interventions are perceived as unjust expropriations.

One solution would be to encourage the advancement of blockchain-based social media. Social media that would offer benefits and opportunities from one decentralization area of  content management and exchanges of information.

It would be the end of the user considered as a product. And it could protect both freedom of speech and security. Social media in which everyone would be represented in a way more similar to reality: like Oloni, to use a term coined in 1967.

The word “Olone” was introduced by the Hungarian author and journalist Arthur Koestler in the 1967 book Ghost in the machine . According to Koestler, a holon is something that has integrity and identity in itself, and therefore is an autonomous and self-regulating system; but at the same time it is part of a larger system. Just like we human beings are: single particles, but also a single whole.

No social media like Big Brother Censor, no attention factory. Otherwise, what today seems absurd and unrepeatable will be only the beginning: a dystopian dictatorship based on social evaluation. 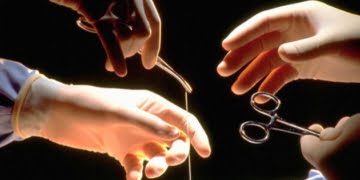 Nowadays technology is advancing in every field, and especially in medicine it helps us to be more and more efficient. And the...