A green bridge called its own green line will cross the Seine in Paris, bringing with it a great message of sustainability. 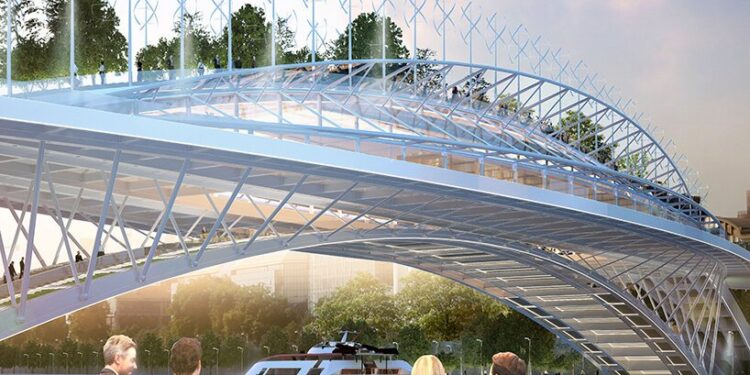 The images of the large “garden bridge” designed by Vincent Callebaut in Paris, known as “the green line”, have just been unveiled.

The concept of the green bridge (or, as mentioned, the “green line”) is a prototype of “edible”, resilient and depolluting architecture. the structure of the green bridge generates its own energy from renewable sources, recycles its own waste and wastewater, optimizes its needs thanks to sensors and careful data monitoring.

The green bridge, a living artery

Callebaut's concept, not new to extraordinary ideas in the name of technology and environment, it promotes social and cultural innovation through flexible and changing shared spaces.

Spaces that adapt to the needs of the new generations and to new uses in continuous evolution.

The green bridge walkway enriches the urban greenery in the area between the village of Bercy next to Paris and the Masséna district. The green line will create a sinuous connection between the two banks that connect the 12th and 13th arrondissements of the French capital.

The green bridge in Paris will be a real park dedicated to the 'parisculteurs', the urban farmers of the city.

The project aims precisely to raise awareness of eco-gastronomy and alternative consumption: its panoramic roof and horticultural greenhouses host 3.500 square meters of vegetable gardens and orchards under the Parisian sky.

An ode to slow food: fruit and vegetables grown on the Paris Green Line walkway will be cooked directly in its restaurants, with panoramic views towards the French National Library.

The Green Line is designed to offer Paris much more than a gateway from one bank to the other. It will be a place to have fun, learn, eat and innovate. On the roof there will be a dense and rich urban agriculture in collaboration with 'Sous les fraises'. On the green bridge, instead, a campus will be developed on the theme of sustainable smart city (classrooms and training for students, companies, professionals, etc.). There will also be restaurants and public spaces.

The message of the project it's nice and wide. In summary, managing air and water in a sustainable way. Even in urban areas of Paris. the project will finally include a large amphibious garden of 8.500 m².

In total, 12.000 square meters of new green spaces and phyto-reclamation lagoons will take root in the district to promote the development of an endemic biodiversity corridor.

A green bridge to the future.