A world without work: cross or delight?

This has always been the billion dollar question. What will we do if we no longer have to worry about working in a jobless world?

How desirable is a future in which robots and artificial intelligences come to replace more than 70% of human professions? It depends on what man can do with it.

The great Oscar Wilde dreamed of it. He really dreamed of a jobless world. In his book "the soul of man under socialism" (buy it, in ebook it costs less than 1 euro) the writer already imagined a society freed from fatigue thanks to machines. "While Humanity will have fun, or enjoy cultivated leisure time ... or do beautiful things, or read beautiful things, or contemplate the world with admiration and joy, machines will do all the necessary and unpleasant work."

The paradise described by this esthete inspired one of his most famous observations: "A world map that does not contain the country ofUtopia it is not even worth a look ".

In Wilde's day the future of work was the first question that any aspiring utopian (the word "futurologist" had not yet been coined) had to answer. Everything else, from gender relations to crime prevention, grew out of this.

Benjamin Franklin, Bertrand Russell and John Maynard Keynes were among the supporters of the goal of drastically reducing working hours. The great economist in the thirties in his book "Economic opportunities for our grandchildren" (this costs only 5 euros) coined the term "technological unemployment". He defined it as "Unemployment due to our discovery of ways to economize the use of work by overcoming the rate at which we can find new uses for work". A book, this one by Keynes, that was really written for the readers of a century later: and in addition now it only costs 5 euros, accattatevillo (today I am in the mood for literary advice, in version Letteratu.it).

Written as the cross between a prophecy and a provocation, Keynes's short essay has since become a fixed text for later thinkers, starting with those in Italy (I am thinking of Franco Modigliani) who have been called “post-worker”. The prospect of the demise of work has thus created new jobs for economists and opinion makers, some of whom make Keynes look like a cautious amanuensis.

In the essays of some modern thinkers, the future is described as a fully automated luxury communist regime. A world where the simple concept of "jobless" is prehistoric. Between solar energy and 3D printed food, luxury pervades everything. The society based on paid work becomes a legacy of the past, as it was for the feudal peasant and the medieval knight.

On the opposite level to this bullish trend there is instead the dystopian vision, in which robots throw the workers on the pavement, condemning them to lives of poverty and desperation. In 1980 the New York Times came up with a disturbing headline: "There is a robot in the future of your work." If more than one feels a thrill in reading a statement which in itself is neutral (that is, it describes a present or future reality), it is clear that interpretation becomes everything.

A world without a future can truly be a paradise or hell. It depends.

To settle the matter Daniel Susskind, economics scholar and former political adviser to the British government, wrote something remarkable. I can recommend this to you, but I cannot link it to you: it has not yet been released in the bookstore. He is a wise man called "A World Without Work: Technology, Automation and How We Should Respond". He put together facts, data and graphs and put them together very intelligently. The (temporary) conclusion is that yes, even in the past centuries forms of automation tended to replace man in routine work, but at the time this happened without destroying work. They simply created new ones.

It is artificial intelligence, Susskind argues, that threatens to change everything. In human history the standard has always been "this task requires a human being until proven otherwise". Then came the machine to replace the man, and everyone said "workers who have lost low-skilled jobs must retrain for more demanding roles". But what happens when even robots, drones or driverless cars can play "more challenging roles"? Up to half of the jobs are at least partially vulnerable to artificial intelligencefrom truck driving to retail to medicine, law and accounting.

And the estimate is very prudent. For me it is around 75%. So? All out of work in the future? I do not believe.

In 2013, former US Treasury Secretary Larry Summers confessed: “For me the Luddites were always wrong, and technology enthusiasts were always right. Now I'm not so sure anymore ". In short, for him the work will sooner or later completely end. Keynes saw this as an opportunity.

Susskind only touches on the problem, but he asks himself important questions. Work ethic, he says, is a modern religion that claims to be the only source of meaning and purpose. "What do you do for living?" It is for many people the first question to ask when they meet a stranger. Yet faced with precarious and unsatisfactory jobs for a penny, many are losing confidence in the gospel of work.

Susskind wonders in the last pages "If academics and commentators who fearfully write about a world with less work do not mistakenly project the personal enjoyment they get from their work onto the experience of everyone else."

The challenge of a jobless world is not only economic but political and psychological.

I ask a question softly: what will people do all day without work? Unemployment tends to create loneliness, lethargy and social unease, especially for young people without work. Should I be unemployed and desperate, now? I'm not saying this. And I ask again: Is relying on work to provide self-esteem and social status an inevitable human truth or just the product of a sick work ethic?

Keynes regretted that the possibility of an era of "leisure and plenty" was viewed with terror: "We have been trained too long to struggle and not enjoy rest". In other words, does the fear of not finding work or the fear of a world without work win more? Or maybe the fear of running out of money. Or without work and without money. Money and work. Help!

World without work: the state will have to facilitate the transition

Going beyond the labor era will require something like a universal basic income funded by capital taxes to share the proceeds of technological prosperity. The available work will also need to be distributed more evenly: after nearly six decades of 40-hour weeks, the goal will (utopistically or practically) aim to bring down the first 8. 32 hours by 2030, as the British Labor manifesto states. Removing the focus of society from wage labor will require visionary 'leisure policies' at all levels, from urban planning to education. A Copernican revolution.

In other words, we will be forced to consider what it really means to live a meaningful life. 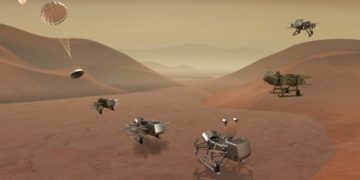 Dragonfly will land near Titan's equator, between dunes apparently composed of layers of solid hydrocarbons. It will be powered by ...