The most recent act of the protests of the yellow vests is striking: firefighters beaten by the police. Emblematic fracture of a France in crisis.

A rain of batons falls on the demonstrators in a clash that is unbelievable: in Paris the police in riot gear, masked and dressed in black, charge and beat the uniformed and unarmed firefighters.

It is a scene that few in the world have seen this week, especially in France. Guerrilla in Paris. The media have largely ignored the reasons of the French firefighters, who have joined the national protests of the yellow vests, now in the square for months. Emmanuel Macron and his attempts to bring about radical changes to French society are in the sights.

"This is the neoliberal hell created by Macron," reads in a tweet that shows videos of the guerrillas. "The police beat firefighters in the streets, while the entire Western press ignores."

Paris guerrilla, how it went - Wearing protective clothing (and made up by Joker), the firefighters set themselves on fire in the streets, symbolically but immensely sacrificing themselves. Have you seen these images around? In how many? The protesters turned to social media to denounce the general lack of interest in a movement that is still growing: these are the largest and most sustained protests in France since the time of the famous May 1968.

Many said (and I don't think they're wrong) that if this crackdown had taken place in Venezuela or Iran, it would have been the number one news item across the western world. Still, a Wednesday morning search on the home pages of the New York Times, Google News and Yahoo! News had found no coverage of the previous day's events.

Yellow vests, the media silent on some serious episodes

Nothing in the media even when the professional photographer Taha Gueffaf he was rushed to hospital after the police threw a grenade at him. Gueffaf shared an X-ray of his injuries on Twitter, asking Interior Minister Christophe Castaner why there were fragments of metal grenade in his leg.

No reaction even from human rights advocates such as the Committee for the Protection of Journalists or Human Rights Watch: only Iran as a "trending" topic on their website, in France everything seems ok, right?

A neo-liberal and repressive France

The polls in December have brought his approval rate to just 30%. Yet, "strong" of this consensus at historic lows, Macron continues to say that France cannot be reformed but must be "transformed". His Tatcherist-style policy aims to transform the country from social democratic to neoliberal.

Yellow vests, the story of a riot

The trigger for the yellow vest protests was the government's plan to make radical changes to the French pension plan, seen by many as a jewel of the welfare state. Macron intends to unify France's 42 pension programs into a single unified program, which he claims is more equitable and transparent.

The "national standard" would bring the retirement age from 62 to 67, and this causes discontent in all categories.

Popular resistance has lasted since the beginning of his mandate.

Protests across the country, at all levels

The current series of strikes began in early December, led by transport unions that shut down much of the country. The historic Paris Metro has been badly damaged, as have regional trains.

Also many French ports, including Calais, Dunkirk, Marseille and Le Havre, have been blocked by dock workers.

Lawyersfearing that their pension plan would be taken away from them, they went on strike throughout the country, theatrically throwing their robes in a symbolic gesture of defiance.

The ballet dancers they performed a free show on the steps of the famous Opera Palais Garnier in Paris. Louvre employees they closed the famous museum telling visitors that "the Mona Lisa is on strike" and claiming that Macron's plan would "lower everyone's pensions".

The same French firefighters they are protesting the proposed changes in retirement age and worsening conditions. "We are the last link in the chain of emergencies in France and we are overwhelmed by the calls"Said Frederic Perrin, head of the fire brigade union. "We need staff and resources, and a reassurance that we can focus on emergency response and not serve as a supplement to absent health services."

During the demonstrations, the firefighters marched in uniform with other groups on strike, acting as a human shield in the belief that the police would not attack their first responders, with whom they work closely every day. Yesterday's footage demonstrates that this belief was tragically wrong. And it is a strong fracture, perhaps another way of "dividing to rule".

Only the last of the means used by those who have the task of crushing dissent in this new "France of the future" desired by Macron. 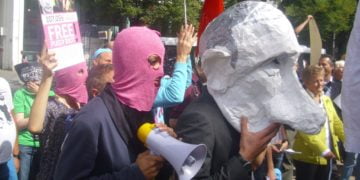