The creation of robotic flocks is done.DEAnsect is a robotic insect capable of moving with special actuator "muscles" and holding up with blows of all kinds.

If one day swarms of tiny robots will never be used for purposes like pollinate flowers or explore disaster sites, they will have to have a good resistance. A robot created at the EPFL research institute in Switzerland seems to adapt quite a bit, since it can even resist the blows of a fly swatter.

Each of its three silicone legs contains a DEA, which in turn consists of an elastomer membrane sandwiched between two soft electrodes. When a low voltage current is applied, the electrodes are attracted towards each other, compressing the membrane. Once the current is interrupted they move apart, allowing the membrane to expand to its original thickness.

Powering on and off occurs over 400 times per second, causing DEAsect to vibrate forward at a speed of 3 cm (1,2 inches) per second.

There are currently two versions of the device. The first is wired to an external power and control system. It is this robot insect that can be crushed by a fly swatter or crushed by a shoe, and continue on its way undeterred.

The second version is independent, with integrated battery and microcontroller. Using the integrated "eyes" it is able to trace and follow independently the black and white motifs printed on the ground.

Its creators are now working on a system that would allow multiple DEAnsects to communicate with each other, so that they can coordinate their movements. In short, a robotic swarm.

The research also involved scientists from the French University of Cergy-Pontoise. It was described in an article recently published in the scientific journal Science Robotics.

Here are some DEAnsect in action in this video. 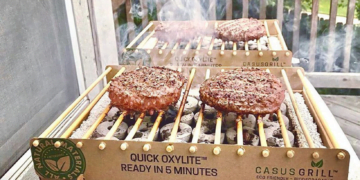 Take a barbecue, grill the impossible and in the end throw everything away, so much so that it is 100% recycled. Casus Grill, point and ...