Not all of them have disappeared leaving their bodies on a bed: some patients in a neurovegetative state are still there, we don't know how to get them back. 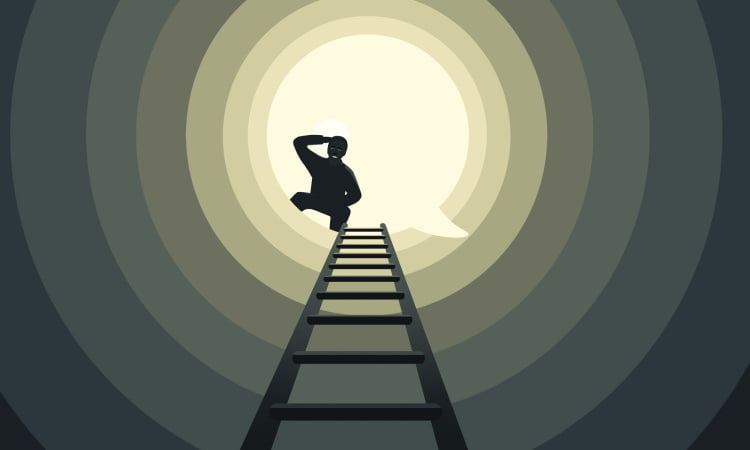 In 2006, the neuroscientist Adrian Owen and his colleagues they noted and reported what happened when a woman reduced to a neurovegetative state was asked to imagine playing tennis. His brain showed a path of activity quite similar to that of a healthy person.

"It wasn't entirely absent," Owen writes in his book In the gray area. A neuroscientist explores the boundary between life and death. "He replied, he did what we asked."

It is since the late 90s that Owen has been hunting for signs of consciousness in people who are now considered to be without them. His patients have disorders due to accidents, brain damage. Someone is there for other situations that have resulted in oxygen deprivation in the brain. Disturbances of consciousness are different from a coma: in vegetative states or in those with minimal signs, people are awake, but not present. They may have their eyes open, they occasionally move them: there are "almost", but that "almost" makes the difference.

Someone is still with us

Owen and others have presented studies showing how from 15 to 17% of patients with consciousness disorders can produce brain responses such as the woman who was asked to imagine tennis. An important step, which however leaves a lot of anger: we know that some of these people are there, somewhere, but we don't know how to bring them back here.

Un paper published last week in the magazine The Neuroscience of Consciousness examined a proposed break. Give patients with consciousness disorders psilocybin, the active ingredient found in hallucinogenic fungi (and being studied by a brand new medical branch) to induce the recovery of consciousness, or the ability to manifest it.

Andrew Peterson, assistant professor at George Mason University's Institute for Philosophy and Public Policy, said his instinctive reaction to reading the proposal was stunned, but then he got his attention.

The idea of ​​giving psilocybin to these patients is based on theories regarding the relationship between brain complexity and consciousness. Complexity is the level at which different regions of the brain come to communicate with each other, and low levels of awareness are associated with less complexity.

Psychedelia seems to increase complexity levels beyond the limits of normalcy, as he says Gregory Scott, neurologist at Imperial College London and co-author of the paper proposing the use of psilocybin. There is no definitive scientific evidence that states of consciousness "improve" with the use of the substance, but a large number of cases show several examples of increased brain complexity. That's why Scott and his colleague Robin Carhart-Harris they proposed a test.

Trials would serve to measure the therapeutic value of psilocybin, and show us something new about consciousness. Psilocybin interacts with a particular serotonin receptor, and increases neuronal activity in relation to it. Many of these neurons are concentrated in points that are believed to be implicated in the formation of consciousness, and seeing the presence of responses to stimuli would confirm that these are crucial areas of the brain.

Scott and Carhart-Harris recommend extreme caution and testing initially on healthy subjects in the state of sleep or sedation, to see how much psilocybin intervenes on consciousness in these states. In case of positive results, the researchers plan to extend the tests to patients in a neurovegetative state.

The reason is absolutely (and rightly so) ethics. There are currently no tests, and it would be a crime to practice them on non-consenting people and unable to express discomfort or possible suffering. Psilocybin has been rated as "revolutionary therapy" by the FDA for testing results on depressed and drug-refractory patients. Neurovegetative patients, however, are another matter.

The ethical risks of the experiment

First of all, there is the possibility that this neurovegetative state is a protection from the discomfort and suffering of having lost the cognitive skills necessary to live. If those patients are not currently aware, it is not at all said that finding it would be a reason for happiness. It could be the other way around, and represent a cruel prison for them.

Ditto in case of anxiety or frightening effects, which patients in that state would suffer without being able to react in any way.

"Just because relatives and friends of patients, or public opinion would like to bring them back with us does not mean that doctors can feel authorized to practice everything on them," says Owen. However, in the case of positive responses in healthy subjects, Owen himself would not give up on proceeding. because giving up a cause like that would still be a crime. 20 years of new knowledge on the subject would not have happened if he himself had given up fighting.

And then, let's be honest: these are people who would have died 20 or 30 years ago. Today they are still there in those beds because medicine has made enormous progress (even with radical machines that put death on standby for those who should already be dead, such as ECMO).

Over time, this "population" in a neurovegetative state will increase, and it is unthinkable to give up helping it, says Scott. Within the limits of a low risk index, we must try to bring it back to life, it is a moral duty. Aptera, our favorite solar-powered car (also because it is currently the only one), also adds a "camping" option. That...