Not just robots: in the future we will have cell phones, cars, space stations with a metal bone skeleton that regenerates itself in the event of fractures. 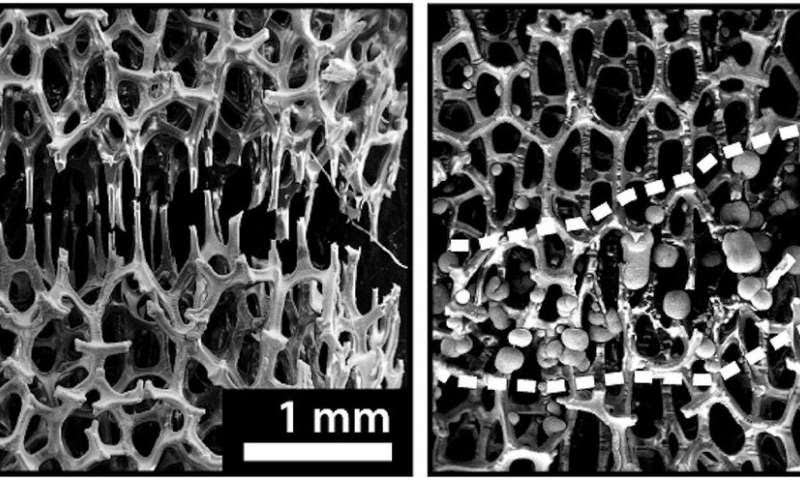 Today, for the first time in the world, a research team has developed a way to repair metal at room temperature. A "regeneration" very similar to the repair process of our bones, which will lead to the birth of a real metal bone.

The study was led by James Pikul, assistant professor of mechanical engineering at the University of Pennsylvania, and Zakaria Hsain, a student of his. The results were published in the Advanced Functional Materials journal.

Research in a nutshell

The "porosity" of the internal structure of a metal foam reduces the weight of a metal while keeping its strength unaltered, but makes it impossible to repair it with traditional methods.

If a metal breaks, in fact, bringing it to the melting temperature would destroy the internal cavities of metal foam.

The electrochemical technique used adds metallic material only in the "fractures" of the broken one, almost as if it were a metallic glue, repairing the structure.

It is the electroplating, a low consumption procedure that takes place at room temperature. It is commonly used for chroming auto parts, or plating metals. By wetting the broken metal in a solution containing chromium ions and applying a voltage, the ions react forming a mass that fills the broken parts of the metal. And that's it.

Pikul and Hsain “healed” three types of damage in as many experiments: metals with cracks inside, metals almost broken, metals separated into two parts.

The duration of the procedure is approximately 4 hours, and since plating occurs simultaneously, the time taken does not depend on the size of the metal to be repaired.

To those who point out that this repair approach is not really "self-healing" (because a voltage must be applied to produce the reaction), Pikul says it is absolutely identical to the repair processes in our body.

"Everyone would say that our bones repair themselves," says the researcher, “And our material is just like bone. Even bone needs an external source of energy to repair itself, in that case the food we eat ”. True.

The similarity with our biology will direct the future of this research towards the creation of a metal bone that will constitute the skeleton of each device, small or large. "The electrolyte that produces the repair can be integrated into metal structures in liquid form," says Pikul. A bit like a fluid, even blood, which carries nutrients into an organism.

"In case of damage, the liquid will surround the damaged area and repair it with a voltage that can be obtained from the internal power supply itself, or from a battery."

In other words, in the future we will have cell phones, car doors, robot and maybe space stations that have a skeleton of "metal bones" that repair themselves like ours when they fracture.

And without even the plaster.

MIT describes the system that allows the robot boat to join others to form moving bridges and platforms. In...