A sea of ​​uses, and a clear road in construction in these difficult times. Hemp has only one problem, but a big one: you never grow too much of it. 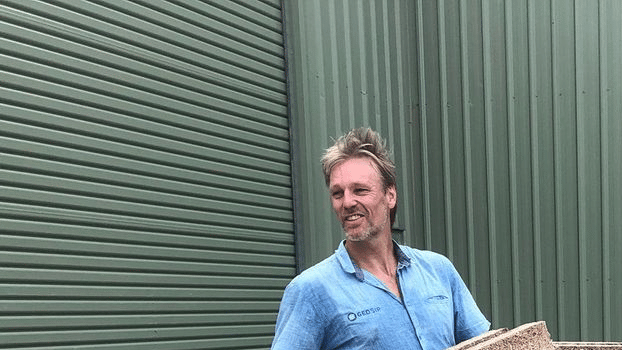 in Environment
⚪ Reads in 4 minutes

Hemp is a worldwide absurdity: it has a sea of ​​uses, and the world seems to be divided only between those who smoke it and those who oppose it. What if I told you that its use in construction is widely appreciated, and that the only problem with this situation is that there is not enough hemp for it yet?

And it would take some. A lot. This is the same conclusion reached by Christian Eiskamp, and long before they cut the ribbon on the first hemp semi-detached house built in Lower Saxony, Germany.

Christian Eiskamp had spent decades building single-family homes in Oldenburg, a city of just over 100.000 people. Then he had the intuition that the golden age of concrete could end due to its bad impact on the climate. And he found hemp as an alternative building material.

Oxwash, the laundry of the future introduces sustainable laundry

The concrete industry is responsible for 60% of global greenhouse gas emissions. Need to add more? On an intelligent planet, certainly not.

If you saw the house, then. I'm not saying in the picture, you can see that here, I mean up close. From the outside, it doesn't look like it was made of hemp. It is paneled in wood, has a porch and a nice roof, it looks like “The house on the prairie”. Obviously there is still some concrete, between the foundations and the "framework".

The structure, however, is entirely covered with bricks made of pressed hemp straw and joined with malce. It costs 15% more than a traditional construction, but that's the only downside. At the end of the life of the house, after how much? 70? 100 years? The hemp and lime part can be completely composted. And that's just the beginning.

Let's start with the most important thing: the climate balance. A house made of hemp blocks holds carbon dioxide (CO2) tight until it stands and the material neither burns nor rots. Each ton of dry matter stores one to three tons of CO2. Does it seem little to you?

Climate researchers have long favored wood as an eco-sustainable material (if used en masse it could really help achieve our goals, at least according to a study published in Nature in 2020). But practice and theory are two different things. And wood costs a lot, it has increased in parallel with the increase in demand.

Are there no alternatives? Of course yes. Anything that contains a high percentage of cellulose is suitable for construction.

Fantastic materials and where to use them

Rising demand for hemp houses would revive sustainable agriculture, as hemp can easily be integrated into crop rotations. Its deep roots improve the soil's ability to absorb water. It doesn't need a lot of fertilizers or pesticides.

And you don't smoke, contrary to popular belief. Commercial hemp, unlike cannabis, does not contain THC, the active ingredient that produces the "high". In Europe it has been used for much longer as a material for making fabrics and sails.

And what happened then? From the postwar period onwards, America and Germany have banned all cultivation of "marijuana", making (it should be said) a bundle of all weed. End of hemp fabrics and everything in between. Cement, steel, cotton, were cheaper and took over.

Today the conditions have changed. There is a worldwide shortage of building materials. The resurgence of hemp is almost a consequence, and the methods of making bricks have improved a lot. Insiders have coined the term "hempcrete" (from "hemp", hemp and "concrete", cement) to label many different products, from building blocks to insulating panels.

And this could be the right "ride".

We need to cultivate more

From 2018, the year of construction of the first prefabricated hemp house (in the Netherlands) to 2021, when the French municipality of Croissy-Beaubourg, near Paris, became home to the first public building in hemp stones. It has been 3 years of vertical growth, which has led to the few companies in the sector, such as the Belgian Isohemp, to open new production lines for ever higher demand.

And here the problem arises. How much hemp do we have in Europe? Little. Here is the truth. In the last 5 years no one has grasped this trend: according to Eurostat, the area cultivated with industrial cannabis has grown from around 20.000 hectares in 2015 to 36.000 hectares in 2020.

The prospects are not the best, if you take into account the need to grow wheat (a priority given the conflict in Ukraine). There is great hope even in this complicated period, though. Small German consortia are joining together to develop a more cooperative construction industry: artisanal, but interconnected. At least at the regional level.

With the right price and a good offer, building houses much closer to the environment, that would be the real buzz.