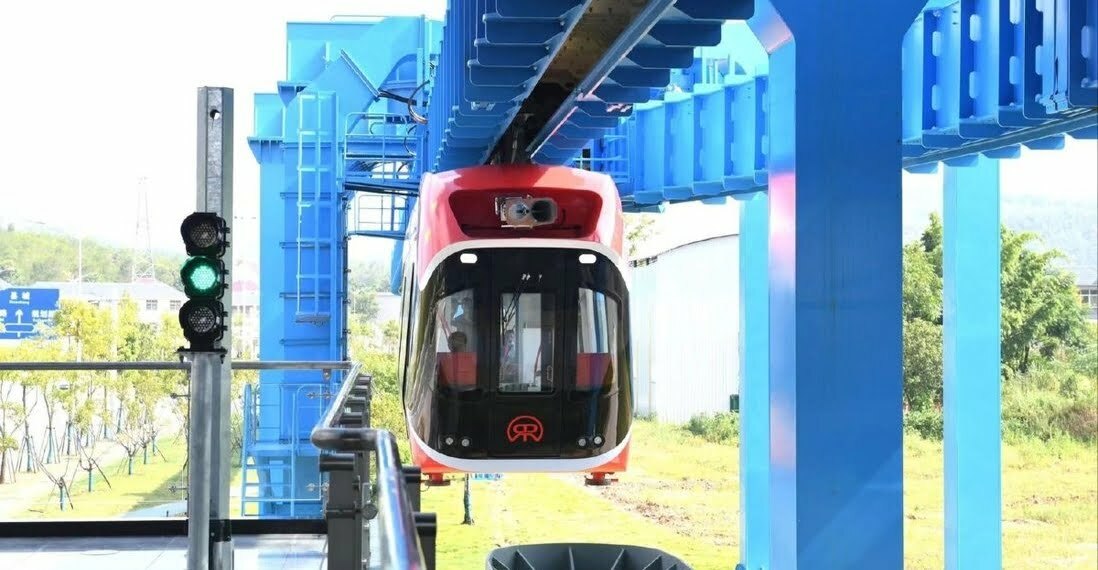 China has completed the world's first suspended maglev line: it uses permanent magnets to allow a "Sky Train" to float even in the absence of electricity.

What is special about the Chinese suspended Maglev?

Unlike most existing magnetic levitation lines, the newly launched Red Line operates approximately 10 meters above the ground. No physical contact with the rail as the train moves beneath it at a speed (for the time being) of 80 km / h (50 mph).

When fully operational, the train's operating speed will be 120 km / h, in the second phase of the test line which will be extended to a length of 7,5 km (4,7 miles).

A train arm surrounds the track and the permanent magnets in both the arm and the track repel each other, holding the Maglev in suspense. In the absence of friction, researchers from Jiangxi University of Science and Technology explain, only a small amount of electricity is needed to drive the train.

Economically, the cost of building the experimental line showed enormous sustainability - just one-tenth of that to build a subway, the researchers said.

Magnetic levitation lines are being built in several Chinese cities, with some maglevs capable of reaching speeds of up to 600 km / h. However, most of these designs use levitation powered entirely by electricity. This not only increases energy consumption, but also generates a strong electromagnetic field which could harm people in the vicinity.

Adding rare earths to a magnet greatly increases its lifespan. Neodymium, for example, can reduce the loss of magnetism a less than 5% in a century. Magnets with rare earth elements are therefore known as permanent magnets.

With its dominance in the supply of rare earths, China controls more than 80% of the worldwide production capacity of permanent magnets, according to an estimate of industrial experts. For this reason, China has long been planning the construction of magnetic levitation railway lines that make use of permanent magnets. It has supported research projects with funding on these Maglevs since 2001.

Long Zhiqiang, a professor at the National Defense University of Changsha and a member of the Red Line project, says that permanent magnet maglev is far superior to the metropolitan alternative in terms of speed, silence, comfort and electromagnetic pollution. He also adds the extreme reliability of a system which, as conceived, is very rarely damaged (a permanent magnetic field absorbs shocks and eliminates friction for much longer).

"In the future," says Long, "it will give China a new edge in leading the world in rail transport."