A robotic micro-swarm of iron oxide nanoparticles has excellently replaced a toothbrush in cleaning plaque from teeth. 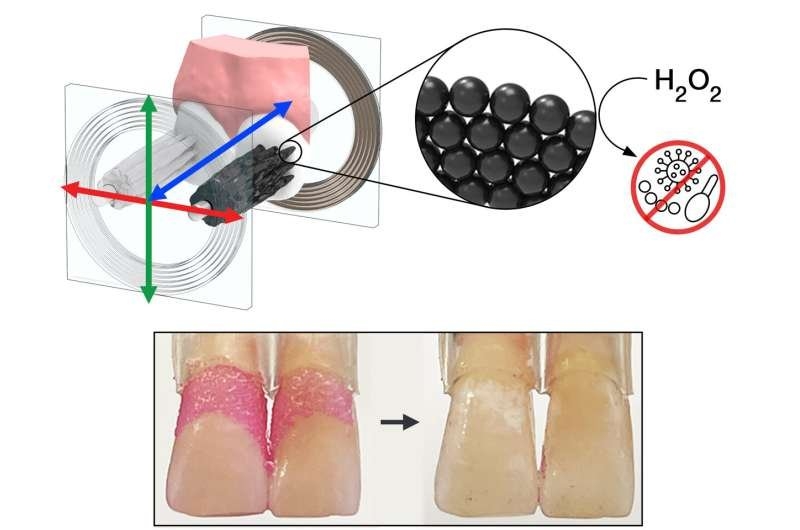 Nanoparticles have magnetic and catalytic properties. These properties allow the generation of free radicals which also destroy the germs that cause tooth decay. Credit: Minjun Oh / Penn Dental Medicine

A shape-shifting microrobot could someday be used as a toothbrush, mouthwash and floss in one solution. The technology, developed by a multidisciplinary team ofUniversity of Pennsylvania, aims to provide a new automated method for completing daily dental cleaning tasks. The system could be particularly valuable for those who do not have the manual skills necessary to brush their teeth effectively.

Microrobots are made up of iron oxide nanoparticles with catalytic and magnetic properties. The researchers used a magnetic field to guide their movement and shape.

From time to time these structures may brush away dental plaque from the surfaces of larger toothbrush-like teeth, or slip between the teeth in the form of fine threads, such as dental floss. In both cases, a catalytic reaction prompts the nanoparticles to produce antimicrobials that kill harmful oral bacteria on site.

In a proof of concept study published in ACS Nano (I link it here), researchers at the University of Pennsylvania have shown that this method effectively eliminates plaque that can cause tooth decay and gum disease.

"Routine oral hygiene can be a challenge for many people with movement difficulties," he says Hyun (Michel) Koo, professor of dentistry at Penn's School and co-author of the study. “You have to brush your teeth with a toothbrush, then floss, then rinse. Gestures that for many people are simple, for others very difficult. This robotic system can do all three phases hands-free and automatically ".

"Nanoparticles can be studied and manipulated in many ways using magnetic fields," he says Edward Steager, another co-author of the article. “We make these particles work just like little robotic arms cleaning a surface. Properly programmed, this system can carry out the entire operation automatically ".

The toothbrush design has remained relatively unchanged for millennia. We have added electric motors, but the basic concept (bristles on top of a stick to pass over the teeth) has always been the same.

A few years ago, researchers from two different Penn teams made a discovery almost by mistake. For different reasons they were both interested in iron oxide nanoparticles. Koo's group was intrigued by their catalytic activity, and published a study (here it is) on their ability to activate hydrogen peroxide to kill the bacteria that cause tooth decay. Meanwhile Steager and fellow engineers were exploring these nanoparticles as building blocks of magnetic-controlled microrobots (here is their study).

As they say? The future is already here, it just isn't well distributed.

Put the two studies together and you will have an incredible result. A platform to electromagnetically control the micro-robots that take on the tools for cleaning the teeth.

Of ALL types of teeth.

“It doesn't matter if you have straight or misaligned teeth, the robotic toothbrush will adapt to different surfaces,” says Koo. "The system can adapt to all corners and crevices of the oral cavity."

Researchers have tested this system virtually everywhere. On plates of a tooth-like material. Then on 3D printed dental models. Finally on real human teeth. Each time the system worked perfectly, clearing the surface of all detectable pathogens.

The tips of the “brush” configuration bristles are firm enough to remove plaque but soft enough to prevent damage to the gums.

The future of "toothbrush robots"

The adaptability of the system, according to the researchers, could make it sufficiently sensitive for clinical and personalized use, being able to adapt to any type of dentition. New tests are underway and the first employment on volunteers is approaching.

“This technology is as effective as the traditional tooth cleaning action, but it is fully automatic and requires no manual dexterity. It will help people with disabilities and the geriatric population ".

Later in the year, we will probably put some sort of magnetic "pulp" in our mouth, lean on a device and perfectly clean our teeth in seconds. Sounds like science fiction, right? Well, even the radio for a man of the 1700s had to look like that. 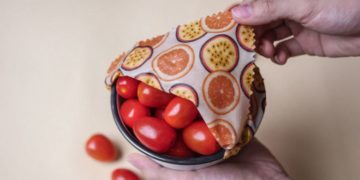 SuperBee's beeswax acts as a natural antibacterial, while the addition of coconut oil and resin help the film ...