The company known for its vertical thrust engines collaborates with the Japanese delivery giant for a uniquely shaped cargo drone. The UAV is powered by six Voith-Schneider cylindrical vane engines (if you want to know more) which work on the principle of cycloidal blades. The main feature of the mechanism is that it spins quickly, constantly changing the angle of inclination to provide adequate traction. The project of this cargo drone is called CCY-01: the name doesn't say anything, but the nickname (then I'll tell you) is nice. And the look is amazing!

The Yamato-Cyclotech drone has six rotating cylinders with blades: two in front, two in the back and two more in the center, positioned at a 90 degree angle to them. The front and rear screws are responsible for forward movement, with one of the pairs serving as a redundant system, a kind of backup in case of an emergency.

The cylinders positioned at 90 degrees instead provide horizontal lateral thrust, which allows the cargo drone to compensate for lateral winds during landing.

As mentioned, the design of the CCY-01 module is very particular. Its dimensions have been specially designed to carry the Yamato cargo module called Pod Unit for Parcel Air-Transportation, for PUPA friends. It is a small trolley with retractable wheels that "hooks" to the drone.

The PUPA is docked in the cargo drone hold using a special metal rod. Inside the compartment, the wheels fold up like the trolley of an aircraft (or that of an ambulance stretcher). The payload of the CCY-01 is 45kg, the flight range is up to 40km, the speed is about 130km / h, the landing area size is 2,7 x 2,5m .

Do you need more figures? Not for now. And then the images speak: the ones you see are part of the feasibility study. When we will see fly such contraptions, the future will have arrived long ago. 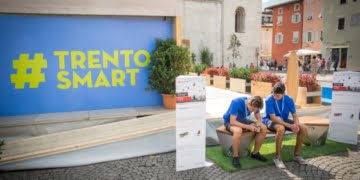 #Trento is the real #smart city of the future. A few examples? In Trento you can find benches that in addition to recharging ...