In the SoFi Stadium in Inglewood, California, there is a giant screen that will fly over the lawn of the 2022 Super Bowl final. 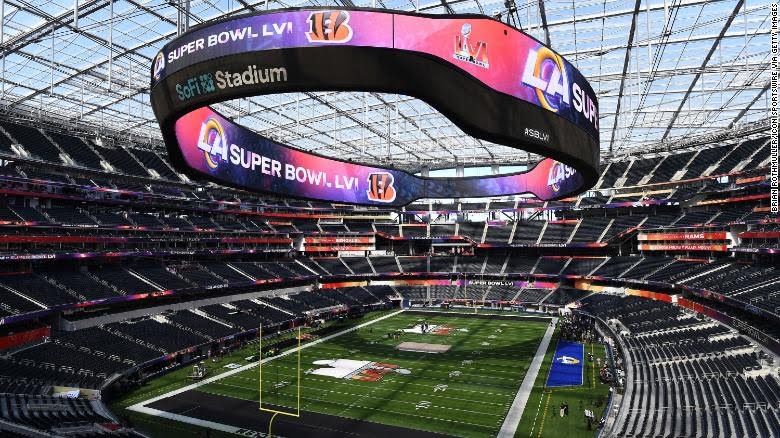 At SoFi Stadium in Inglewood, California, there is a flying saucer flying over the lawn and awaiting tomorrow's Super Bowl 2022 final. Both teams will play with more than 1.000 tons suspended over their heads.

At 120 meters in length, the oval suspended nearly 40 meters (122 feet) above the pitch is according to Samsung, the largest video screen in the history of sport (and the world). And he'll win me a bet. We bet you didn't know this Infinity Screen was already there by mid 2020? Here you are. I won.

The Infinity Screen is the icing on the cake of a pharaonic facility: the SoFi Stadium in Inglewood is a huge $ 5 billion facility shared by two NFL teams: one of them will play for the victory in the Super Bowl, which is a sort of challenge in American sauce. I'm kidding: it would be like saying that the Beatles are a kind of K-Pop band in English sauce.

When the Los Angeles Rams and the Cincinnati Bengals meet on Thursday night, fans in the 70.000-seat stadium will be able to access a sea of ​​game data thanks to the huge screen. The incredible panels ranging from 6 to 12 meters (20 to 40 feet) in height will alternate with instant replays, close-ups, stats, scores and interactive updates.

21.000 square meters (70.000 square feet) of ultra-high definition screen with a total of 80 million pixels on the inside and outside, the Infinity Screen will be watched by the entire Super Bowl stadium. Fans seated lower down will look at the inside of the screen, while those higher up will see the outside.

And I don't tell you the noise: with the equivalent of 1.500 home theater speaker systems there is no chance of missing a single referee whistle.

Sports fans argue, sometimes rightly, that they can see better and get more game analysis from their living rooms than they could at the stadium - this is a step that could bring them back into the fold.

Apart from the rhetoric of the good fan who has fun outdoors and lives a "real" experience, there will be more and more competition between the stands and the sofa. The home viewing experience has gotten so good with bigger, sharper screens, that you need to raise the bar on what a live experience means. Super Bowl 2022 promises to be an apotheosis for such a screen and stadium: something that reconciles with events.

Super Bowl, a cradle for technology

The Super Bowl, the sporting event that arouses the most attention in the world, has long been a testing ground. Not only in communication (companies compete to amaze the public and secure the very expensive advertising space), but also in technology. Already in 2017 the Fox Sports VR app made virtual reality highlights available, almost at the dawn of these devices. This year's Super Bowl will be visible in an immersive virtual theater using the Oculus, Meta's VR viewers.

For those who still have the "old" TV, the NBC broadcaster will use a new augmented reality (AR) function to combine statistics and content produced by around 40 cameras that will film the match.

And then there is the Halftime Show

Among the “extra-large” things that this event offers is… the interval. A space apart, a real spectacle in the show, which over the years has amazed how and more than a few opening ceremonies of the Olympic games.

This year the "nostalgia" effect will be strong, a parade of stars of the rap scene of the early 2000s: five sacred monsters of the genre (Dr. Dre, Eminem, Snoop Dog, Mary J. Blige and Kendrick Lamar) will give life to an adrenaline rush.

All clearly transmitted also on the "big spaceship" in the middle of the stadium: the first of many that will fly over the future of sports and shows.

The device, developed with a new rapid prototyping technique that allows to reduce costs and times, can help almost ...