We will see autonomous delivery robots everywhere in our cities. From today I know that they will also be able to climb the stairs alone. 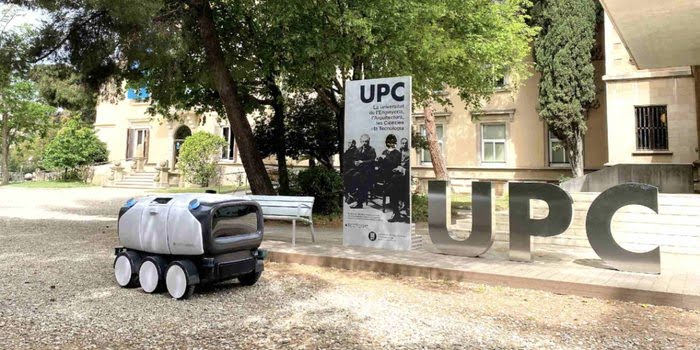 It has six wheels and can climb or descend steps up to 20cm (7,9 inches) in height.

In a few years, it will probably be quite normal to see robots delivering packages and transporting goods in cities, even climbing the stairs of houses and apartment buildings.

There are now many companies looking for decisive improvements to launch the offensive on this particular market sector. Some big players have already developed its own autonomous delivery robots: eg Alibaba, whose robots are becoming more and more important in daily life in China.

The world is made up of stairs

Of all the companies that have already launched their first prototypes, however, the robots developed by Polytechnic University of Catalonia (UPC) e LICENSE have an extraordinary feature: I am able to go up and down stairs.

The project, which began in 2017, is in its final stages: this year they will begin to move in a pilot project that will involve three European cities. Esplugues de Llobregat (Spain), Hamburg (Germany) and Debrecen (Hungary) will be the first to see these “things” wandering around.

According to the researchers involved in the project the delivery of the last mile represents over 20% of pollution in cities. A problem that could potentially be solved with more efficient autonomous electric robots (and cheaper: they could reduce delivery costs by up to 40%).

Tireless devices, of course, but which can also operate at times when there is less traffic congestion.

How the "up and down" robot is made

The UPC and CARNET prototype can move at a maximum speed of 20 kilometers per hour (12,4 mph) and measures like a small refrigerator. It has six wheels and can go up or down stairs, with steps up to 20 centimeters (7,9 in) high.

Managing the urban distribution of goods is a very expensive undertaking for logistics companies. Finding a suitable place to unload and reload trucks is difficult in cities due to urban congestion and the lack of parking spaces for loading and unloading commercial vehicles.

I do not hesitate to firmly believe that this solution will be pursued and achieved in the shortest possible time. Our cities will be populated by autonomous robots for deliveries: it is not an "if", it is a "when".

Augmented reality in the field against the coronavirus. A Chinese startup develops AR glasses that read the ...