3D printing and laser come together to develop an unsuspected ability: that of "creating" a cutlet and cooking it perfectly. Here is a window into the future of food.

It is the fruit of the work of a team of scientists from Columbia University in New York. The "chef printer" comes in the form of a machine with the ability to 3D print chicken meat, also performing "precision cooking" using a "multiple wavelength laser".

For those curious about lab-grown meat (myself included): Chicken still doesn't materialize out of thin air: I'm not talking about making realistic meat like wagyu beef from materials that are anything but. As it stands, the team has simply fed the machine with chicken puree, a bit like Fast Food company nuggets. Of course, this usage suggests that in the near future a cutlet indistinguishable from the ones we eat today will also be molded from cultured meat, but this is not the time.

The plus: precision cooking, for chicken and more

In their article published this month in the journal Science of Food, the Columbia team says the main challenge to overcome was "controlled space delivery of cooking energy." And that's where lasers come in. Lasers allow you to direct a precise and easily controllable jet of heat energy directly to where you need it. It can be precise enough to cook a chicken cutlet directly in its packaging.

By experimenting with a few different types of lasers, the team found that infrared lasers brown food 'more efficiently' than blue ones, but apparently blue lasers were better at cooking chicken internally.

It is believed that this "chef printer" technology will allow for a more creative design of food, allowing us to customize meals and cook (even at home) with hitherto unthinkable qualities: from tests, the "printed and cooked" chicken breast has retained more moisture and shrank less during cooking than regularly cooked chicken.

In what may be one of the saddest taste tests ever, the research duo who lent themselves to the test decided that laser-cooked, 3D-printed chicken was better than conventionally prepared chicken. Despite the fact that you could feel the metallic taste left by the laser during cooking. There is still a little work to be done, while I still suggest the traditional method.

Or a nice salad. 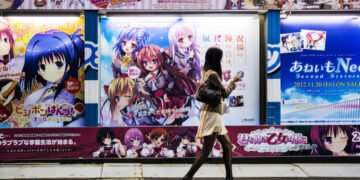 More and more Japanese girls (they call themselves "dream girls") entrust intimacy to love simulation games, the Otome. A risk ...