This comfortable smart shirt can measure your heart rate

Rice University “spins” carbon nanotubes onto a tight mesh, transforming it into a formidable “diagnostic” piece of clothing. 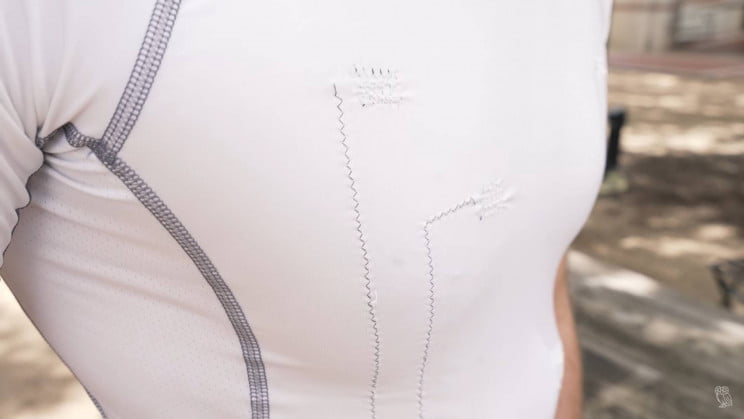 Rice University researchers they developed flexible carbon nanotube fibers that can collect accurate ECG and heart rate readings when woven into a fabric. They made us a super light, snug t-shirt that can measure vital signs.

A t-shirt to have everything under control

The shirt obtained by the Rice team can be worn, and even washed like a normal piece of clothing. On the contrary: its fibers are also much less likely to break when a body is in motion. But otherwise how does it behave?

Goodbye pee in the glass: Olive KG does 'passive' urinalysis with AI

The researchers reported that the shirt collected much better data than a standard chest strap monitor and performed much better than commercial medical electrode monitors at taking ECGs.

A t-shirt spun in carbon nanotubes

This “diagnostic” shirt is made of a conductive nanotube thread that adds several functionalities to normal clothing. "The shirt must fit snugly to the chest," he says in a note Lauren Taylor, lead author of the study. "In future studies, we will focus on using denser patches of carbon nanotube threads so that there is more surface in contact with the skin."

Carbon nanotube fibers were first developed by Matteo Pasquali, a laboratory engineer at Rice University. Pasquali has studied many applications for fibers, including their use as bridges to repair damaged heart tissues, electrical interfaces with the brain, cochlear implants, flexible antennas. Even for automotive and aerospace applications.

Initially, the fibers were too thin to be handled by a sewing machine. It was then that the researchers enlisted the help of a rope maker to create a thread that would then make up a piece of clothing: a very, very special shirt.

"We worked with someone who sells small machines designed to make strings for model ships," said Taylor, who initially tried to weave the yarn by hand, with little success. "He was able to create a mid-scale device that does the same."

The fibers of the shirt are sewn in a zigzag pattern: a mechanism that allows the fabric to stretch without breaking them. Future applications? Lots of: human-machine interfaces for automobiles or soft robotics, as antennas or as health monitors and ballistic protection in military uniforms.

The new diagnostic shirt study was published in ACS Publications.