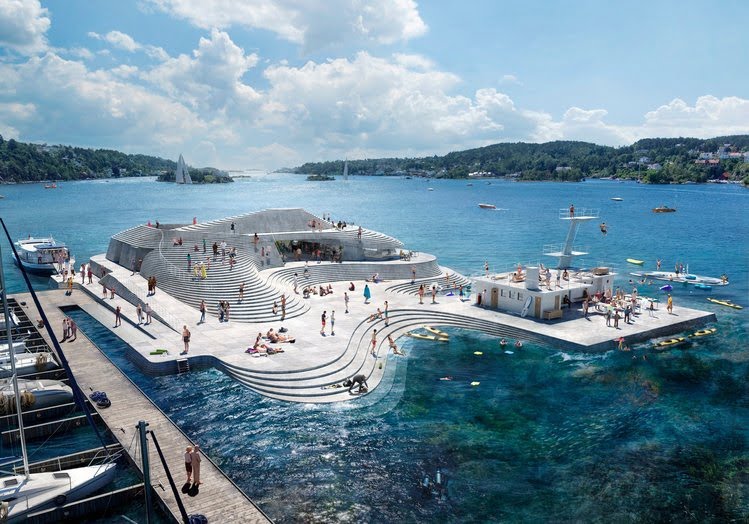 A traditional Norwegian harbor bath is resurrecting as an entertainment plaza, literally emerging from the water in topographical layers of concrete.

Originally built in 1937, the Knubben Harbor Bath in Arendal, Norway was a public place for water recreation, with a kiddie pool and a 10-meter (33-foot) diving platform. It was a center for swimming education and diving competitions until 1947. After a brief comeback in the 60s as a jazz club, much of the bathroom facility was demolished in the 80s after falling into disrepair.

Back in style (Norwegian style)

To celebrate the 300th anniversary of the city of Arendal, the harbor bathroom has been reinvented once again. This time from the Norwegian architectural firm Snøhetta, former author of a gigantic Norwegian naval project, which I told you about here. To maintain the functionalism and “modernist spirit” of the former pavilion, Snøhetta designed a multipurpose building that includes a minimalist-style emerged island.

“In restoring the traditional harbor bathroom to its original glory, we realized that the volumetric response had to speak a different architectural language. It's our way of honoring the proud 30s bathroom history, ”says the project manager Marius Hauland Næss.

A square that emerges from the sea

The new structure will emerge from the sea, supported by steel poles and imitating a topographical map with its shaped layers of concrete building on top of each other. As the Norwegian studio explains on its website, "it will look like a block of stone fashioned during the last glacial period." The walls will alternate between concave and convex, preserving the clean and modernist lines of the first bathroom.

The stepped levels will provide seating for large crowds to view the outdoor stage and amphitheater. They will also provide a place for people to relax and enjoy the sun and scenery. “Underwater” towers will also return, allowing customers to partake in the same entertainment as their ancestors nearly a century earlier. The pavilion will also include a large indoor area built under the stairs, with additional performance spaces and a restaurant, which will allow the Norwegian bath to be a year-round attraction.

“The facility has the potential to become a hybrid that seamlessly combines culture, recreation, marine biology and learning and a very locally anchored eating experience,” adds Næss.

One of the goals of the Norwegian project is to make it as environmentally friendly as possible. We hope that all materials used can blend in with their surroundings and withstand moderate conditions.

“One of our goals is to infuse the project with additional additional technologies that focus on recovery and recycling of materials , such as, but not limited to, glass. So far, there have been no compositions that produce zero or even negative CO2 emissions, so we are considering switching to a green alternative, ”he says.

Norway's new Knubben Harbor Bath will open to the public in 2024. 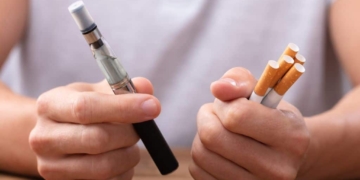 If vaping also creates that "little problem there", let me say: this or that for me is equal. Almost even. In any case...