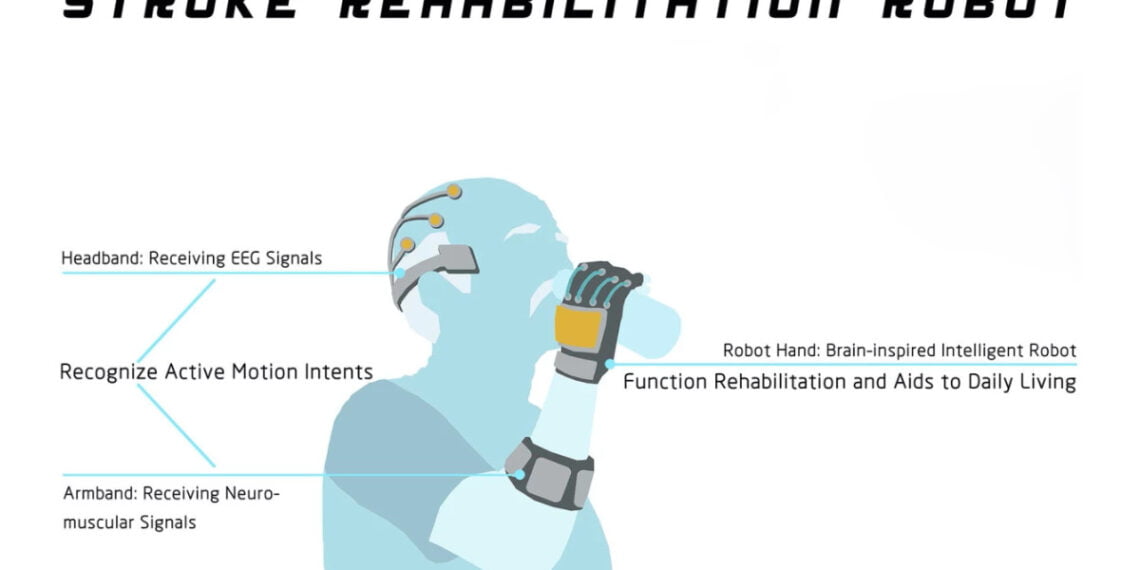 When someone has a stroke, they often find it difficult to transmit commands from the brain to other parts of the body, such as the limbs. A new robotic system called NCyborg may one day help rehabilitate these people, giving them the ability to move.

NCyborg is currently under development, the fruit of a US-China collaboration (yes, there are still some though the new cold war). At work on the robot to rehabilitate patients are the Tongji Hospital Chinese (affiliated with Huazhong University of Science and Technology) and the brain-computer interface company BrainCo, affiliated with Harvard.

A robot that is worn to rehabilitate

Plans call for the wearable system to initially be used to rehabilitate the paralyzed hands of stroke victims. It will consist of three main components: an EEG (electroencephalography) band that reads electrical signals from the brain, one that reads neuromuscular signals from the forearm and a robotic glove to wear obviously on the hand.

How the system works

When the patient attempts to perform a certain action with their hand, the headband and cuff will detect the associated electrical signals and transmit the data to a connected computer. There, an AI-based algorithm will cross-match the received electrical signals with a hand movement database to determine which movement matches that particular pattern. Then it will activate the glove, to start rehabilitating the hand by "moving it" with the intended action.

The idea is that training in this way will gradually rebuild the wearer's damaged neural pathways, eventually rehabilitating the patient who will be able to perform hand movements without any robotic help. Meanwhile, there are also other attempts to "automatic rehabilitation".

It is hoped that the first manual version of the system will be available within five years. By then, he should be able to identify at least eight hand movement intentions with an accuracy rate greater than 90%, reacting in less than 300 milliseconds.

The goal of the project is to develop a robot to rehabilitate stroke patients. An easy-to-use, reliable and affordable robot that will enhance the effect of rehabilitation, speed up the process and reduce costs. states the

dr. Jonh H, Tongji Hospital. Zhang, co-author of an article on the project.

The paper on the robot to rehabilitate was recently published in the journal Brain Hemorrhages.