SpaceBok is a robot - research platform to send devices capable of walking and exploring never-before-seen ravines to Mars. 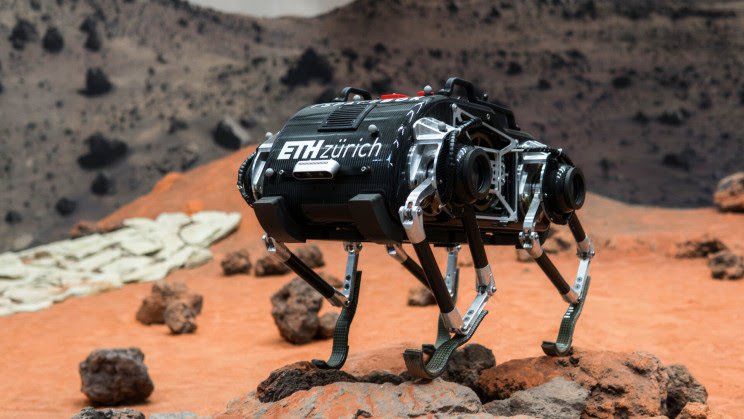 in Robotica, Spazio
⚪ Reads in 3 minutes

All the rovers that to date have reached and plowed the Martian surface (from the old Pathfinder to the last Zhurong) had one point in common: the presence of wheels.

SpaceBok no. He has more important projects.

SpaceBok is the quadrupedal robot built by a team of scientists from theETH in Zurich in Switzerland and the Max Planck Institute in Germany. Its name derives from that of the springbok antelope. Do you know him? It is the symbol of the South African rugby team, to understand.

What does SpaceBok do?

It does not sharpen knives and does not repair gas cookers, it must be said. It was originally designed for hopping and walking on the lunar surface. Just like astronauts did during the Apollo landings!

Now, to adapt the concept to Mars, where the terrain is more treacherous and gravity is stronger, the SpaceBok team has altered the robot's pace to make it more stable.

Their work is detailed in a study on the arXiv prepress server.

How do you walk on Mars?

The team tested several paces. He alternated small hoof-like feet to flat and round feet with studs for added stability.

Because much of the research on Mars revolves around craters (Mars Perseverance landed on Jezero Crater, which may once have been a habitable river valley) the team behind SpaceBok trained the robot on a large "tilted litter" filled with rocks to simulate Mars.

And it made a big splash, friends. Yes, robots on wheels are more stable. I am not surprised that they were the first choice for space exploration. The robots with legs, however, will be able to go where no rover would go.

The first car that flew into the skies of another planet, NASA's Ingenuity helicopter, has great potential for detection, but a quadrupedal robot, in theory, would allow detailed exploration of rocky terrain and even Martian cave systems.

The research that led to SpaceBok

In their article, the SpaceBok team demonstrated that the machine is capable of efficiently scaling a simulated Martian tilt without falling, which would be disastrous for a billion-dollar mission.

The researchers wrote that their findings present new avenues for "safe and efficient global route planning strategies to access steep topography on Mars."

And they are right

Tests showed that both the smaller and round snowshoe-like feet allowed the SpaceBok to maintain a stable footing on an incline of up to 25 degrees.

With the other innovations in robotics coming in full swing (such as proprioceptive feedback to descend stairs and gradients) in the coming years we will undoubtedly see more arrows at the arch of SpaceBok.

And soon (certainly before us bipeds) we will see one of these gadgets scurrying over the red planet.