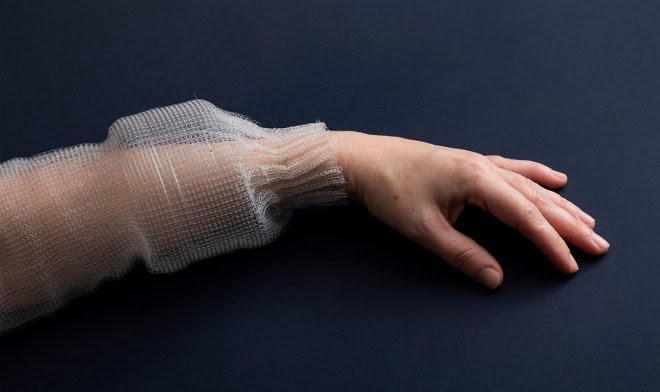 A team of scientists led by Yoel Fink of MIT, Massachusetts Institute of Technology (USA) has developed a new type of electronic fabric that functions as an element of a computer system.

Researchers have collected a polymer that behaves like a normal textile thread. And just like any thread, it can be threaded into a needle and woven into fabric. In addition, this polymer also conducts an electrical signal as if it were a communication cable.

Research on digital fabric was presented in the latest issue of Nature Communications.

Simply transmitting a signal (not a binary code) doesn't make a lot of sense, so Fink invented tiny silicon chips with a simple set of instructions, even when melted, to embed in the fabric.

With hundreds of chips and a common communication system that can be organized simply by embroidering motifs with thread, the team managed to achieve a high-profile digital system.

In its simplest form, the fabric is a universal data storage device. During testing, a towel embroidered with this thread stored a 767 kilobit color short film and a 0,48 megabyte music file for more than two months.

Will we have a t-shirt that remembers all the places we wore it, complete with photos and videos? Or will there be clothes that will offer "special contents"? Applications as usual endless.

It is even more interesting to note that with an increase in the length of the wire and the complexity of the circuit, the tissue can be shaped like a computer or a neural network.

For example, Fink made a system of 1.650 seams sewn into a shirt. The tissue analyzed human skin temperature and humidity data and, after some training, learned to recognize the type of exercise it performs with 90% accuracy.

The fabric sample developed by MIT can withstand up to 10 washing and drying cycles and does not restrict movement.

The bottleneck is currently the presence of an external controller, but Fink believes it won't be difficult to replace it with miniature integrated counterparts.

And then it will be possible to create a true "intelligent fabric" that can be programmed for a wide range of tasks.