The more threatening the drones, the more effective the anti-drone systems. This even makes you smile in its effectiveness: it uses ... confetti!

As drones become faster, smarter, and able to carry large loads over long distances, they pose more and more of a real threat when used as a weapon.

For this reason, in parallel with drones, the military are developing anti-drone countermeasures. The new approach I'm talking about in this post he knocks them down with… Confetti ?!

It's easy to say "shoot down a drone"

Taking careful aim and blowing up a drone with a shotgun isn't impossible, but it's not easy and it's not reliable.

The Defense Advanced Research Projects Agency (DARPA) has developed an alternative way to neutralize drones. The Achilles heel of most multimotor drones is the fact that all propellers work properly.

Even minimal damage often means that a drone's main mission or flight plan cannot be executed.

A special automated system makes predictions on the flight path of the enemy drone, and then automatically activates one of the many reusable drone interceptors in the field. Instead of lasers, bullets or nets, the latest approach to neutralizing the threat is to detonate a wad of confetti. To be precise, a strong material similar to a streamer that spreads as it travels through the air.

This increases the chance of at least one thread of the material wrapping around a drone's propeller blade and stopping it.

Will antidrone confetti streamers be standard?

Using these confetti streamers as ammunition has many advantages. It is potentially more environmentally friendly when missing pieces land on the ground, and safer in the event of an aiming accident.

But that's not to say it's cheap, as (confetti aside) the overall effectiveness of this approach is completely dependent on the autonomous flying interceptor getting close enough to hit the intended target.

Seeing it in action certainly doesn't seem like one of the cheapest tools of the military.

Anyway, the "drone-antidrone" duel has only just begun. 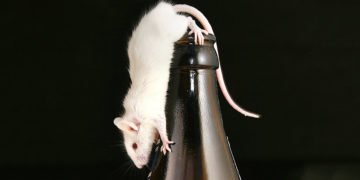 The discovery of a brain circuit responsible for controlling compulsive drinking may lead to the development of an "optogenetic" cure ...