The cut away parts of a famous painting by the rebel master, Rembrandt, have been "repainted" by an artificial intelligence, changing the perception of a great work in every sense. 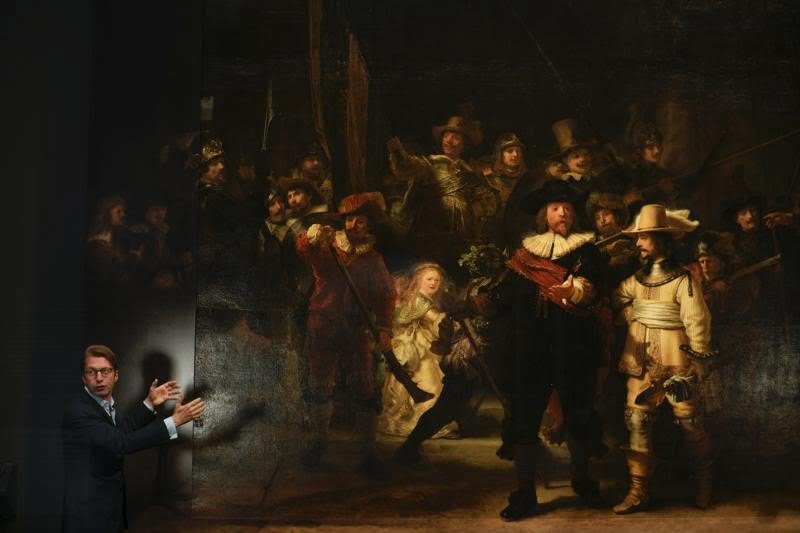 One of Rembrandt van Rijn's greatest paintings just got a little bigger.

A marriage between art and artificial intelligence has allowed the Rijksmuseum of Amsterdam to recreate parts of the iconic 'Night Watch' painting: they were cut 70 years after Rembrandt finished it.

Now the missing parts are printed on a panel positioned on either side of the 1642 painting, in the museum's Gallery of Honor. Their addition returns to the work the decentralized focal point that the rebel master of the Golden Age, Rembrandt, originally conceived.

Rembrandt and a broader view

Today the two main characters in the crowded painting, Captain Frans Banninck Cocq and Lieutenant Willem van Ruytenburch, are central to the cut painting. With the new digital additions (particularly the one to the left of Rembrandt's painting which depicts two men and makes it clear that a boy is looking over a balustrade) the main figures are actually moved further to the right.

It really gives the painting a different dynamic. And what he taught us is that Rembrandt never does what you expect. And Rembrandt's night watch is no exception.

Hunt for the Lost Fragment

The museum has always known that the original, uncut painting was larger, thanks to a much smaller copy painted at the same time and attributed to the painter Gerrit Lundens. Researchers and restorers have thoroughly studied the work for nearly two years. Using high-tech scanners, X-rays and digital photography they combined the large amount of data they generated with the Lundens copy to recreate and print the missing strips.

The researchers took an incredibly detailed photo of the Night Watch, and through artificial intelligence they taught the computer what color Rembrandt used in the painting, and what his brushstrokes looked like. Machine learning also allowed the museum to remove the perspective distortions present in Lundens' copy, as the artist sat in a corner while painting Rembrandt's painting.

Why was Rembrandt's 'Night Watch' cut?

The reason the 1642 group portrait of a civilian militia from Amsterdam was cut out is simple: it was moved from the militia club headquarters to the city hall and did not fit into a wall between two doors there. This was followed by a bit of a very "rough" cut with a pair of scissors and the painting assumed the dimensions known for centuries. Where did the cut pieces go? This remains a mystery.

The digital reproduction will be on display in the coming months. It is part of the Rembrandt framework project: research and restoration of a marvel called "Operation Night Watch”Started just under two years ago, before the global pandemic emptied museums for months.

During the restoration project, Rembrandt's painting was enclosed in a specially designed stained glass window. It was then studied in detail from the canvas to the final layer of paint. Out of that heap of data, the researchers created the most detailed photograph of the painting ever made. Think: it was obtained by combining well 528 digital exhibits.

Dibbits said the printed additions to this new panoramic version (what could I call it? Tele Ronda?) Are not meant to trick visitors into thinking the painting is larger. The goal is another: to give them a clear idea of ​​what it was supposed to look like.

“Rembrandt sure would have done it nicer, but it comes very close,” he says. Since its introduction, CRISPR continues to surprise: here are 5 curious solutions currently being studied for the most famous "molecular scissors" ...