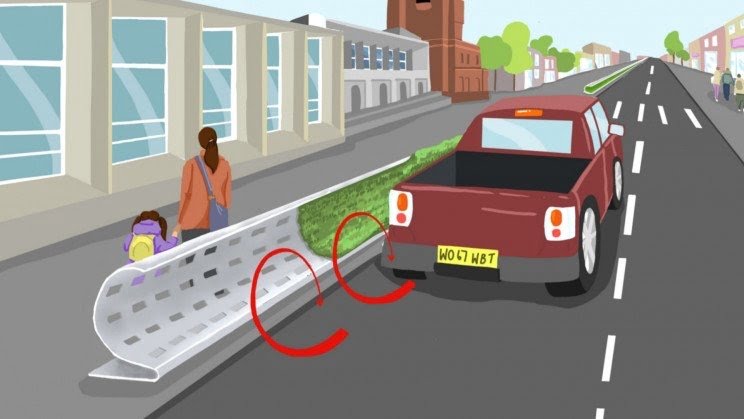 Second the World Health Organization , air pollution kills about seven million people every year. Children are particularly vulnerable as particulate pollutants are more concentrated near the ground at lower altitudes.

In an attempt to address the problem, researchers from Imperial College London they have designed a curved road barrier that protects city dwellers from the harmful effects of air pollution.

Scientists used airflow modeling techniques to study the effects of unique road structures to develop a road barrier design that keeps particulates away from pedestrians. Their findings are published in the journal Cities & Health.

One of the researchers, Dr. Tilly Collins, realized the dangers of air pollution while watching her son play sports in a schoolyard near a busy London street.

"I thought to myself: what can be done? And now? So, I started looking for the interaction of particulates with the walls along the streets," explained Dr. Collins in a press release .

It has become evident that along the pedestrian side of these roadside walls, there are eddies where the air quality can be even worse, as pollutants stagnate more.

Curved structures can mitigate air pollution in the short term

Dr. Collins, along with Dr. Huw Woodward, also from the Center for Environmental Policy, e Agamemnon Otero of Energy Garden, explored ideas for a new road barrier. A structure with the aim of mitigating the effects of the "vortexes of polluted air" that occur on roads pedestrian streets adjacent to those suitable for vehicles ..

Researchers found that a road barrier with curved structures is more effective in dispersing and reflecting pollutants back to the roads. And they offer relatively inexpensive structures inspired by the curved acoustic walls found along motorways in Germany and the Netherlands.

These structures would also mitigate noise pollution and act as scaffolding for green infrastructure in large cities.

Of course, the attention of the scientific community is (rightly) aimed at reducing exhaust gases, but even these "simple" solutions can protect us.

I find the curved road barrier project to be a project with great potential: it can have a huge impact on urban design, air quality and pedestrian health.