Within 5 years, Airbus will have to choose the single platform for the creation of the first commercial hydrogen aircraft: a revolutionary "capsule" system appears among the concepts 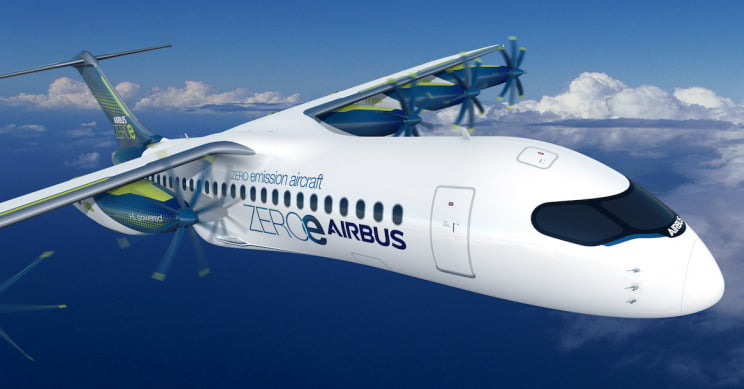 Aviation giant Airbus has revealed new details about its ZeroE project, a hydrogen-powered aircraft that can be groundbreaking.

The new zero-emission aircraft could be a hydrogen-powered aircraft that includes a propeller system "unlike anything existing today," explains Airbus. in a press release.

In September, the aviation giant announced it would develop a hydrogen-powered commercial airliner by 2035.

As part of that announcement, Airbus unveiled three concepts that can leverage its hydrogen aircraft vision: a propeller-powered short-range aircraft, a short-to-medium airliner and a "mixed-wing" aircraft.

The company said it will decide on one of these projects by 2025, so as to focus its research and development team on a single project.

Last week, Airbus engineers revealed further details on the propeller concept: the aircraft, if chosen, will be powered by three "capsules" on each wing.

In addition to housing the aircraft's propellers, each of these pods would contain all the necessary liquid hydrogen fuel, electric motors, fuel cells, electronics and cooling system.

Virtually everything you need for propulsion, in multiple modules that are easy to assemble and disassemble in record time.

This potentially means that already full fuel capsules could be swapped quickly between a landing and a. new take off.

The "capsule" configuration of the hydrogen plane is truly unlike anything seen on today's runways. The idea that ZeroE could present independent "fuel tanks" based on hydrogen cells is potentially revolutionary. It can change the very way an aircraft is built, and set a new standard.

It seems like a century ago, and it was just 2016 when we were talking about "hybrid" aircraft: today the focus is on total hydrogen fueling.

The next step for Airbus is to understand how scalable a solution like this really is for a large commercial hydrogen aircraft.

Glenn Llewellyn, vice president of Airbus' ZeroE division of zero-emission aircraft, stressed in the statement that "this is one option, but many more will be developed before making a final selection, a decision expected by 2025".

However, the capsule system "is a great place to start. It will fuel further investigation into how we can extend hydrogen technology to commercial aircraft," says Llewellyn.

I agree. Who knows if the "capsules" will be able to project the hydrogen plane in the near future.

Very close, if you consider that the European Commission has recently announced its wish to see a zero-emission hydrogen aircraft in service by 2035.