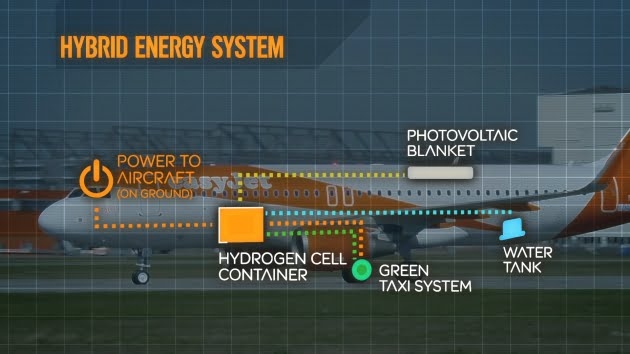 Not only electric and hybrid cars: even the aircraft sector wants to renew itself, and EasyJet wants to lead the way with the project of a hydrogen hybrid aircraft. L'pollution atmosphericin fact, it also comes from airplanes, and the EasyJet company has been trying for many years to reduce CO2 emissions and become "greener."

The company recently presented the concept of an aircraft that exploits the fuel cells to power the motors in the stationary phase. It is still an early stage project, but the airline's goal is certainly noble: they want to reduce CO2 emissions by 7% within the next five years, in addition to the so-called carbon footprint for each individual passenger.

Already on the occasion of the airline's 20th anniversary, EasyJet had organized a competition, The Future of Flight. It was the excellent students of Cranfield University who imagined a hybrid aircraft that uses hydrogen to allow a fuel saving of about 50.000 tons. The aircraft is equipped with a zero-emission system, stored in the hold, which captures the energy produced by the brakes during landing and uses it to recharge the batteries when the aircraft is stationary.

This is a very similar operation to that of KERS (Kinetic Energy Recovery System) installed on Formula One cars. The stored energy could be used to perform maneuvers before take-off, without turning on the turbines. And the only waste product would be thewater, which would be kept in tanks and used for toilets. Photovoltaic panels installed on the top of the fuselage are also included in the project.

Ian Davies, Head of Engineering EasyJet, said: “At easyJet, we continue to apply new digital and engineering technologies to various areas of the business. The hybrid aircraft concept we are presenting today represents both a look to the future and a challenge to our partners and suppliers to continue working to reduce our CO2 emissions ”.

Here are 10 applications with which graphene will change the world.