The new Ascento has taken the best of both types of robots: it has two powerful legs, yes, but with an additional wheel on each of them. 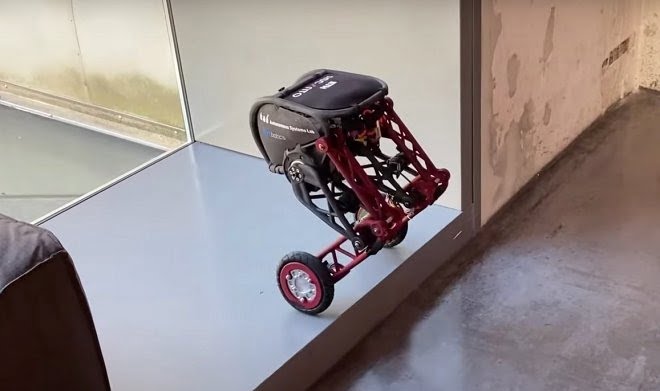 in Robotica
⚪ Reads in 2 minutes

The walking robots are increasingly dynamic and agile: through subsequent improvements, they are now able, for example, to climb stairs with their legs.

At the same time, those on wheels are faster and less complex. How to reconcile the characteristics of both types of robots? This is the question that the new Ascento robot tries to answer.

The new robot has taken the best of both types: it has two powerful legs, yes, but with an additional wheel on each of them.

Ascento has developed at the ETH Zurich Polytechnic. On smooth surfaces it moves with the help of the wheels, maintaining balance by itself. And when it encounters an obstacle, for example, it behaves in a new way. Ascento "crouches" and jumps (up or forward) as if her legs were spring loaded. Practical, isn't it? Plus, Ascento can climb any ladder, one leap at a time.

In addition to climbing stairs, Ascento is able thanks to its legs to stand up even on uneven surfaces. This is because the robot's legs fold independently, allowing Ascento to maintain its body level at all times. This ability also helps him to keep his balance when he is hit from the side, a bit like we have already seen in BigDog and the other "robot animals" of the Boston Dynamics.

Ascento can be controlled remotely or can perform independent tasks. The robot uses its cameras and sensors to traverse spaces.

What else to add? Ah. Yes. Ascento has a battery that lasts about 90 minutes. It weighs 10,4 kg, can accelerate up to 8 km per hour and jump up to half a meter.

This sort of big-headed frog takes steps, indeed leaps and bounds and soon we will find him patrolling houses.