James Dean will be the next deceased CGI actor to star in a movie long after his death. Digital immortality raises strong doubts.

James Dean will be the last actor to star in a movie long after his death, but the rise of true Hollywood immortality raises big ethical questions

Digital humans are coming to a screen near you. Computer generated imagery (CGI) has become cheaper and more sophisticated, and the film industry can now very convincingly recreate people on screen, even deceased actors for decades. The ability of technology to effectively keep celebrities alive beyond the grave raises questions about public legacies and image rights.

Virtual celebrities are already a reality. A handful of digitally created avatars were used as vehicles for advertising, and some of these followed as social influencers. I talked about it here. Last December it was announced that US actor James Dean, who died in 1955, will star in a Vietnam war film due out later this year. Dean will be recreated on-screen with CGI based on old footage and photographs, voiced by another actor.

The reactions for and against

The news was greeted with enthusiasm by those who want to see Dean resurrected digitally for his fourth film, but it has also attracted bitter criticism. Especially in the world of performing artists. To rise is Zelda, the daughter of the late Robin Williams, on Twitter. "It sets a terrible precedent for the future of artists". Her father who passed away in 2014, wished to avoid the same fate. Before his death, filed an act to protect the use of his appearance until 2039 , preventing others from recreating it using CGI to appear in a movie, TV show or even as a hologram.

Parelio, a solar-powered umbrella that makes the beach more sustainable

"The James Dean film is a way to keep the actor's image alive for the next generation," says Mark Roesler of CMG Worldwide, the company that manages the rights to reproduce the look of Dean. "I think this is the beginning of a whole wave", he echoes Travis CloydCEO Worldwide XR , one of the companies behind the operation. "In the future, we want James Dean to be ported to different gaming environments, either virtual reality or augmented reality", he claims.

Other actors were "brought back to life" for advertising purposes. Audrey Hepburn it was digitally recreated for one chocolate advertising in 2013 . In the same year, Bruce Lee reappeared in a Chinese-language advertisement for a whiskey brand , causing the ire of many fans of the actor, who was notoriously teetotal.

Seven years after these very expensive first experiments, what was possible to do with deceased actors only in a small commercial can be done for an entire film. Now a person can be animated from scratch. "If they are alive today, you can put them in scanning platforms, you can analyze every detail of their body analyzed very carefully and that makes it much easier, while working with the available photographs is more complicated," he says. Tim Webber, who won an Oscar for his work on visual effects in the film Gravity of 2013.

Many actors will have the desire to take advantage of this technology and achieve some sort of 'future immortality'. They and their families will be able to monetize their work even after death. Or appear in action movies when they are no longer able to make strenuous scenes. We could even witness the coexistence of an actor and his young double, indeed it has already happened. Will Smith in "Gemini Man" faced his 20-year-old himself. I won't spoil you how it ended.

A potential pitfall in digitally recreating a deceased celebrity is the risk of damaging their legacy. "We must respect the safety and integrity of right holders"Says John Canning of Digital Domain, the US company that created a Hologram of the late rapper Tupac Shakur , appeared in 2012 at a major music festival 15 years after his death.

Legally, a person's rights to the commercial use of their image after death differ from country to country and even within them. In some US states, for example, these rights are transferable to a person's heirs. In California, under the Celebrities Rights Act, the rights last "only" 70 years after their death. The debate is extensive. In conclusion.

On the one hand, the interest of the deceased person which can also be different from that of his family. Robin Williams has been able to enforce it, but others who do not have time to protect themselves may be "enslaved" forever. On the other hand, a reproduction, however realistic, will never be like a real actor, he says. A performance is more than just a physical likeness.

As it becomes easier to digitally recreate celebrities, deceased actors and entirely new identities on screen, can this type of technology put actors out of work? Maybe. But it will take longer than you think.

Also because viewers for quite a while will find these virtual human beings disturbing. These "humanoid" images are not quite perfect, and can make viewers feel uncomfortable. For this reason eyes and mouth must be perfected in a manic way: they are the first things we look in a face, and we are not yet persuaded: we simply cannot explain it, but our brain tells us that there is something wrong. 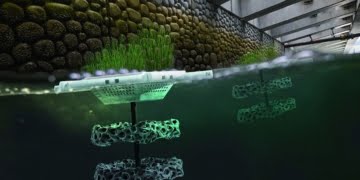 The new 3D printed system "C-Ecology" allows you to create artificial coral reefs to improve the ecosystem of rivers.