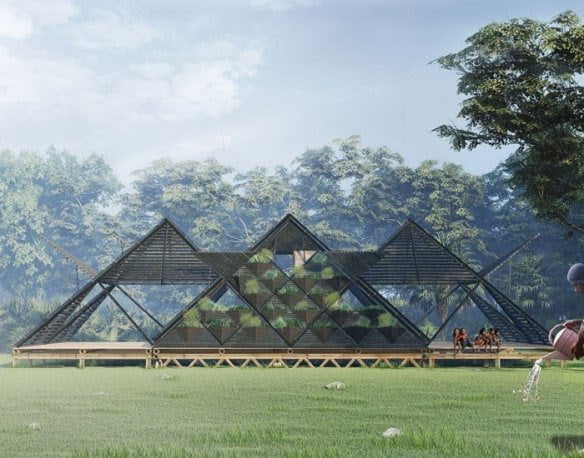 The Dutch studio designs a light, versatile and resistant structure inspired by nature: the bamboo refuge can "defend itself" from the climate

The architecture and design studio EEMY has created a bamboo shelter that is able to withstand even extreme weather excursions.

Created in collaboration with the World Bank, Airbnb and GFDRR, the "delta" of the bamboo shelter can retract into itself when challenged by extreme conditions, just as a tortoise would retreat into its shell.

Taking inspiration from the areas of the Philippines (unfortunately) subject to frequent extreme phenomena and natural disasters, EEMY is inspired by the strength of traditional Filipino bahay-kubo houses.

The pyramidal shape of the delta improves resistance to seismic events while the base is raised off the ground to resist high water phenomena.

In the presence of extreme weather conditions, as mentioned, thearchitecture of the shelter can shrink to half its size, turning into a compact and “super resistant” pyramid.

How the "turtle" defense mechanism is triggered

The shelter "defends itself" from the elements thanks to a series of folding "bamboo tents". These structures can be expanded or folded on the main frame (which extends for about 130 square meters).

Once they have reached their maximum extension (about 260 square meters), the triangular windows and the "wings" can be used as shade, drying racks, stalls and connections to create shared, covered and sheltered courtyards.

The choice of bamboo

The use of bamboo as a material echoes the natural atmosphere of traditional Bahay-Kubo Filipino homes. The primary structure is made up of poles with a diameter of about 12 cm, with wooden beams for greater stability.

Bamboo is also “enhanced” through a treatment with a solution of boron, a naturally occurring saline substance that makes bamboo indigestible to insects.

According to EEMY, the entire construction of the bamboo shelter can be completed in just 28 days. The owners themselves can take care of everything, at a cost of around 8300 euros.

In the event of a manufacturing defect, however, they will have to hide their heads between their shoulders. Joke.