The Borneo orangutan will disappear within 10 years: not because of a pandemic or because of the climate. Not for a predator, nor for infertility. For us. It's our fault, 100%. 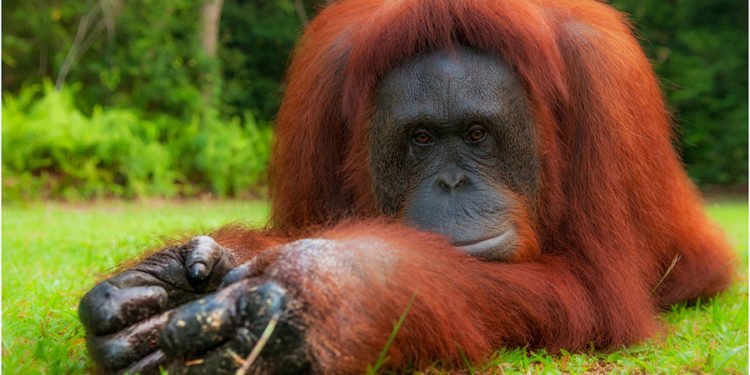 Human impact on the Indonesian rainforest (including fires) poses a deadly danger to one of the closest species, that of orangutans.

Just last July, the Bornean orangutan was placed on the critically endangered species list along with the Sumatran orangutan.

The cause is not a pandemic, nor is it climate change. There is no predator, there are no causes of infertility. We are. It's our fault, 100%.

The Bornean orangutan lives in the forests of Indonesia which have been brutally replaced by commercial oil palm plantations since 1994. To be clear, to date an area as large as the whole of Germany (31 million hectares) has been snatched from the forest.

If you are wondering how a country can be so desperate to purge its unique natural resources on its own, the answer lies in the palm oil industry. A lucrative industry like few others, because palm oil is practically everywhere: from biscuits to bread, from pizza to spreads.

And despite the "virtuous" companies that are excluding it from their products, we are also beginning to see it in toothpastes, shampoos, even biodiesel.

Major brands such as Johnson & Johnson, PepsiCo and Colgate-Palmolive are still in the dock for complete indifference to the results of deforestation.

But is palm oil really that cheap? Are the costs on the planet included in the calculation? What about biodiversity? From an environmental point of view, the use of this raw material makes no logical sense.

Yet logic has no space in Indonesia as in Brazilgiven the fact that most of the fires in their forests have malicious origin for profit. “If the destruction continues at this rate, there is no hope for wild orangutans. At most we have 9 years before their total extinction, " environmental associations explain.

What makes the extinction of orangutans certain is their characteristic as a "slow growing" species. They are able to give birth to children only every 8 years, after 10 months of gestation, and take years to grow and make young specimens independent. Loss of lives occurs at crazy speed compared to the possibility of repopulating.

Their habitat disappears. They literally burn in their home, or they have to escape by coming into contact with other species, forced to compete in a habitat that does not belong to them. For this reason “encounters” multiply even in areas populated by man and orangutans are chased away, hit, often attacked and killed deliberately.

This is why I am not surprised by the announcement of the inclusion of the Bornean orangutan as an endangered species by the International Union for Conservation of Nature (IUCN).

Clearly, time is running out.

That of the orangutans is one of the 4 species of great apes along with gorillas, chimpanzees and bonobos, and the only one present in Asia. The only one among the 4 able to provide evidence on the origins of spoken language: some captive specimens show the ability to mimic rhythms and timbres of the human voice.

Unique, incredible creatures, so close to us in the evolutionary family tree. And they're about to vanish into thin air, into another animal holocaust. A tragedy difficult to avoid, but still avoidable.

Do we really need palm oil so much in our cookies, shampoos or other products when the rainforest can give us air to breathe and biodiversity? What would you choose between palm oil and orangutans?

In an article published last week in Nature, the extraordinary results of a research conducted by two different laboratories ....