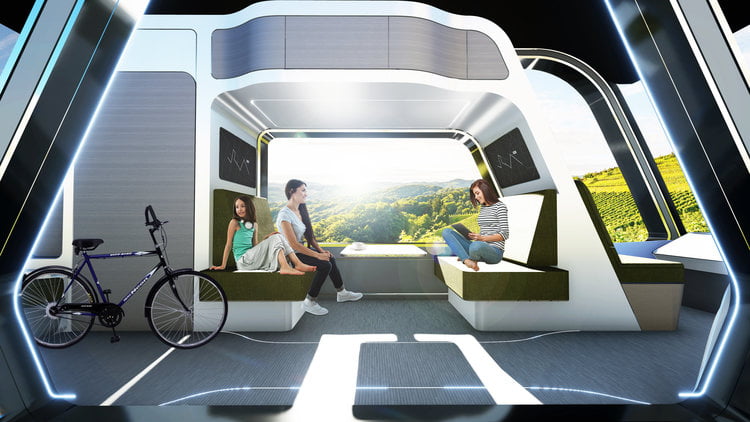 in concepts, Transportation
⚪ Reads in 4 minutes

The diffusion of totally autonomous vehicles will allow innovative solutions and revolutionize tourism.

How about a hotel room that moves by itself and takes you to your destination while you rest, take a shower or watch TV? This is the idea behind ATS, an acronym that stands for Autonomous Travel Suite, "autonomous travel room": it is born from the fervent talent of Steve Lee, Canadian designer ofAprilli Design Studio, and combines his experience in tourism design with his passion for advanced technologies.

Today the approach of car designers is focused on the development of advanced versions of the same old concept: in reality, autonomous driving reveals the vocation of real “mobile rooms” for certain vehicles.

ATS is designed to transport travelers on journeys lasting between 6 and 10 hours, and is equipped with many of the comforts found in the best hotel suites: a space for resting with latex foam mattress, a working corner, a small kitchen, a bathroom, a shower and a recreational area for video games or watching TV .

It has a panoramic window system with touch screens that adapt the view to the number of passengers.

Passengers will be able to "Select the destinations and the intermediate stages of their journey and also stop on the way to take a trip to the gym or restaurant," says Lee.

In the ATS concept, the mobile rooms will be provided by chains of "Car Hotels" which will also provide the necessary services on the road such as vehicle maintenance, replacement of electric batteries, any critical issues and ... cleaning the rooms, of course.

It's not all: in the case of longer journeys, passengers can connect their ATS to “static” units to take advantage of greater spaces and autonomy, or even other shared services such as swimming pools, gyms or meeting rooms.

Will we see any around?

Lee's vision is not merely speculative: the designer has also formulated hypotheses on the real birth of a service like that of ATS, and current technologies already allow its realization ("by 2021," specifies the designer), hoping that the energy infrastructures will move with the same rapidity.

The possibility of birth of the service is very high in the coastal cities of the United States, which have almost complete infrastructures, and aims to have for destinations such as New York, Pittsburgh, Boston or Washington, which are all in the travel range between 6 and 10 hours.

A comfortable and personalized form of transport can really replace part of domestic flights, reduce waiting at the airport and the effort of hauling luggage everywhere, but it will have to overcome the resistance of traditional transport (as long as it is cheaper) and the competition of others. new forms of transport such as taxi gifts that can fly over cities in less time orHyperloop, the hyperfast "vacuum train" that can reach 1200 kilometers per hour.

However things go, apparently, even in the future traveling you will never be bored.