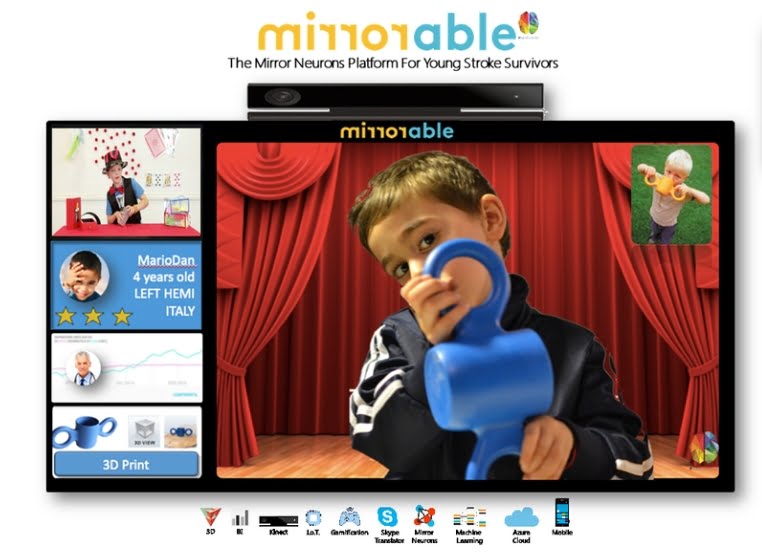 Watching you learn, and it has never been so true as for #MirrorAble. It is an interactive platform designed to "give back" to children affected by severe brain damage some skills, thanks to the use of #neurons mirror. The project was born from the Fight the Stroke association, and is one of the many projects born from the Digital for Social call launched by the Vodafone Foundation. The purpose is to offer rehabilitation therapy at home for children with motor disabilities caused by stroke or infantile cerebral palsy.

The association was created in Milan by Francesca Fedeli and Roberto D'Angelo, Mario's parents, struck at birth by a stroke: "Following Mario in his rehabilitation process - explains Francesca - we realized how the #rehabilitation lacked many elements that we believe are important. Families, for example, were excluded from some decisions concerning the rehabilitation of children, the methods adopted were of an empirical type tested by therapists, sometimes very old and without scientific validation. "Hence the idea of ​​creating an association.

The two then developed a system based on mirror neurons and video stories, through which children regain their skills by observing and "imitatingWhat they see. Each child is then "connected" to another child with similar problems but who has already passed some steps previously. "It is also a way to stimulate the empathy of the children who thus continue the therapy with greater stimuli". In short, the child affected by the disease sees another child who shows the exercises on which he must practice, in a playful and fun context. A simple idea but one that can help many children and many families to recover a certain level of mobility.