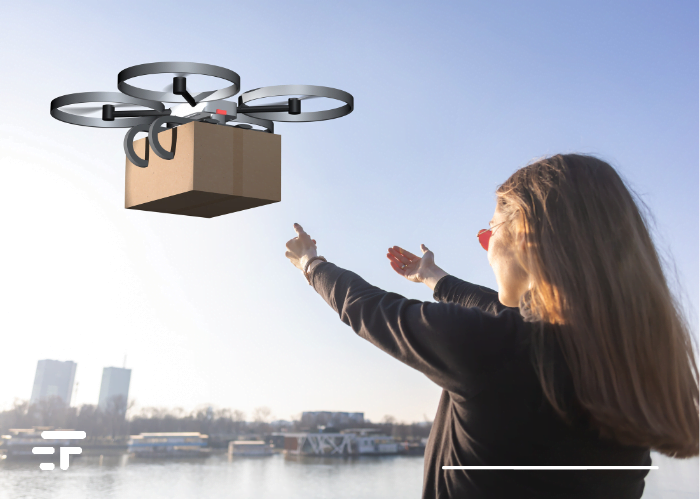 in Transportation
⚪ Reads in 4 minutes

In many countries of the world freight represents almost a third of all greenhouse gas emissions from the entire transport industry.

Some large companies, such as Amazon, have invested heavily in interventions that can (could? Should) offset some of this environmental cost. The most promising are based on software that rationalize and optimize the routes of delivery vehicles, on investments for the transition to an electric fleet (including two-wheelers) and, finally, on deliveries with drones.

There are many things that make drones great for last mile deliveries. Let's face it: on the way from the transport hub closest to the consumer, they are unbeatable.

They are faster, more reliable and cheaper than traditional delivery methods, and most importantly they can be completely autonomous. Environmental impact chapter? Light years ahead of any other delivery method.

According to a new study from Carnegie Mellon University, drones that carry small packages they emit 84% less greenhouse gas emissions than a diesel truck and use 94% less energy.

The future of last mile deliveries

Small realistic premise: deliveries with drones ARE NOT a common practice. It may take you a while to see swarms of quadcopters whiz past suburban chimneys. Equally realistically, however, it must be said that they are progressing rapidly (favored, like remote work, also by Covid-19 which has literally transformed and will transform the planet).

McKinsey estimates that more than 2.000 drone deliveries are made each day worldwide, with growth rates accelerating every week. According to the market research firm, 2022 could close with 1,5 million deliveries. It is not just a beginning: it is a more than indicative, almost prophetic trend.

The rise in popularity of drone deliveries has prompted researchers at Carnegie Mellon University to measure its energy consumption and emissions. To do this, they used small quadcopter drones with packages weighing no more than half a kilo, sending them in hundreds of flights and as many simulated deliveries.

The quadcopters were used at varying distances and at speeds between 14 and 40 kilometers per hour. Analyzing the approximately 200 delivery flights of the drones, the researchers then calculated the amount of energy used and greenhouse gas emissions depending on where the electricity that powered the batteries came from.

Test results? Drones are orders of magnitude greener than diesel trucks and vans. Even electric vehicles. The only vehicle that consumed less energy for the same deliveries compared to drones was the electric bicycle.

"We show the impact of cruising speed and payload mass on drone range, provide generalizable coefficients to estimate drone energy consumption, and show that the energy per package delivered by drones can be up to 94% lower than to conventional modes of transport, "noted the researchers in their study published in the journal Patterns (I link it here).

And now, some practical limitations

I said and I repeat, drones will play a role in the future of deliveries, but while they are much greener than most other options they have their practical limitations.

They can't open mailboxes. Landing in the courtyards they face obstacles and nosy dogs. And on balance, delivering one (small) package at a time isn't the most efficient thing in the world.

While waiting for more robust drones and intelligent software to allow even more efficient deliveries, however, it already makes sense to offset emissions on small packages.