It can be small or large, sailing on waves or in confined spaces: it is the modular "spider" developed by an American company.

Company Marine Advanced Robotics presented the Wave Adaptive Modular Vessel (WAM-V) surface vehicle. Technically it is a modular catamaran with no rigid connections between the hulls. The passenger (or cargo) compartment can therefore also move very high on the water, adapting to all waves in conditions in which other ships would not be able to navigate.

WAM-V is intended for defense and ocean mapping projects.

There is no more "sprung" than this

The WAM-V employs ingenious springs, shock absorbers and ball joints to dampen the waves, allowing the entire structure to be more stable in pitch and roll. All of this helps the ship perform critical tasks in difficult sea conditions. The ship's nacelles are equipped with engines capable of accelerating it up to 55 kilometers per hour (30 knots). Depending on the tasks performed, WAM-V can be equipped with both internal combustion engines and diesel fuel tanks, as well as electric motors with batteries.

A modular spider on the water

The strength of the ship? The modularity of her. The WAM-V has a fully modular, removable and reconfigurable body. This means operators can quickly replace the propulsion system, change the load or install new sets of sensors and specialist equipment. The legs and main cabin of the WAM-V can also be disassembled for shipping, and fit into a standard container.

Also in terms of control WAM-V is very versatile: it can be manned or completely autonomous, with specific software for different use cases. In case it is used for mapping the oceans, the ship is controlled by machine learning algorithms and, in the search mode, transfers the control to a person. According to the startup, the WAM-V is also suitable for search and rescue and support operations for warships.

The lightest option, a 2,4m long robotic ship, can perform tasks in tiny spaces, only needs 15cm of water to move.

The future in the water is increasingly multifaceted. 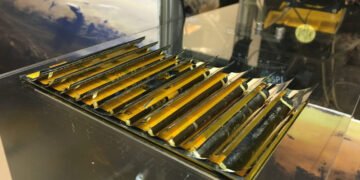 8 years after the start of the project, Caltech finally "sees" the launch of the first prototype to collect unlimited solar energy ...