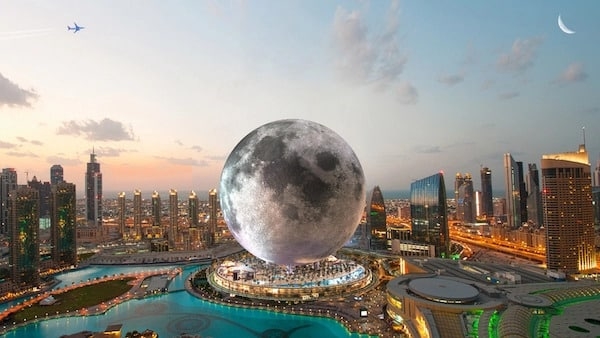 The project is called Moon Resorts Las Vegas, or more simply "Moon", but as mentioned it will offer more earthly pleasures. How else could we call 4000 hotel rooms, a casino, a plethora of concert and event spaces, a 22 square kilometer (!!!) spa and lunar-themed restaurants?

A satellite to scale

Interestingly, Luna from Las Vegas promises to be a low-cost option for space tourism. The co-founder of Moon World Resorts, Michael Henderson, underlined in a statement sent to the New York Post that, with the upcoming tourist flights at exorbitant prices, those who want to "taste" the moon can do so for $ 500. There will even be a reproduction of the lunar surface (4000 square meters) accessible by a "space shuttle", a sort of roller coaster that will take visitors to the 'top of the moon' for a 90-minute excursion that will even include a reproduced lunar colony.

A moon in Las Vegas

Ambitious plans to build this mammoth structure have not yet gotten the green light (it takes a while, and Elon Musk knows a thing or two about his newly approved underground tunnels). And to be honest, even after approval such a construction could take no less than 5 years of work. I'm willing to bet, though, that even then it will be easier to go to Las Vegas than to get on a rocket and go into orbit. What do you say?

The list would be very long, but these 6 examples well represent science fiction technologies that are rapidly becoming reality.