DH2Ome is a "super dome" that aims to provide fresh water where it is needed most and to do it in the best way: carbon neutral. 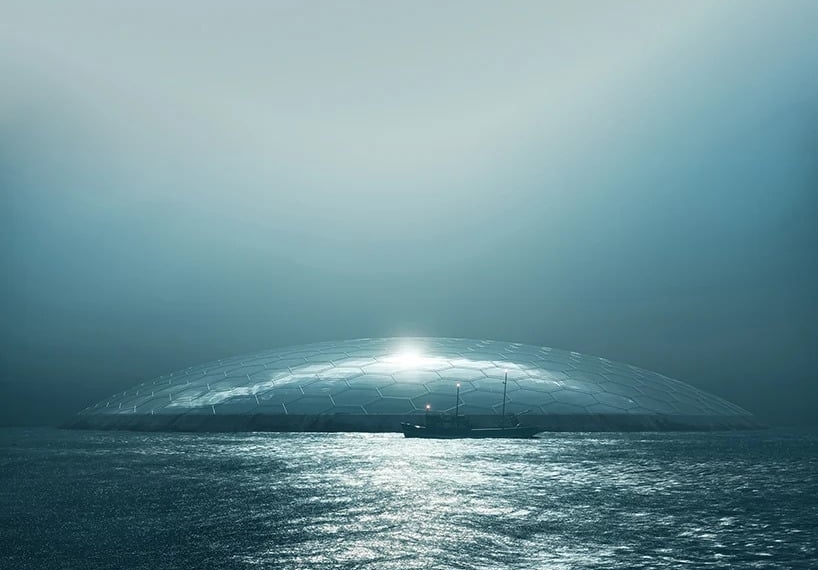 in Environment, concepts
⚪ Reads in 3 minutes

Water (fortunately) is abundant on earth: 71% of the planet's surface is covered by oceans. Unfortunately, it is too salty water to be useful for drinking, hygiene, agriculture, or even for industrial processes. For this reason, the scarcity of fresh water is one of the most pressing problems of our time.

"Ensuring access to water and sanitation for all" is objective 6 of the 17 SDGs (Sustainable Development Goals) of the UN. To tackle this problem we need to define an agenda to give access to fresh water to millions of people over the next 5-20 years. Can we do it with a carbon neutral process, to avoid creating new problems instead of solving them? In summary: can we transform oceans into immense reservoirs of fresh water?

dH2Ome, a concept to focus on an approach

dH2Ome, the concept imagined by the designer Cosimo Scotucci, is a revolutionary infrastructure that aims to provide carbon neutral liters of fresh water where it is needed most, helping to lay the foundations for a healthier, safer and more sustainable society.

Cosimo (read more about him if you like, Thu) sought a holistic solution to simultaneously solve the water crisis and the socio-economic problems of underdeveloped and developing countries. The starting point is the same as other recent projects. And it starts from an obvious circumstance: many of the countries experiencing severe droughts and water shortages are in the tropical area. And in most of these, the sun shines most of the year, making it by far the largest source of energy.

A greenhouse on the ocean

dH2Ome is a scalable solution which essentially consists of a carbon neutral greenhouse located halfway between the water and the sky. Thanks to solar radiation, the water inside the dome evaporates, separating itself from the salt and other products it contains, to eventually condense on the glass surface above. the condensed water drops on the surface are perfectly fresh, and only by gravity will they slide into the drainage system embedded along the entire perimeter of the dome. Once there, the water can be drawn directly or poured into the pipes.

Salt, a by-product of this carbon neutral operation, could be sold to generate money and encourage the development of new economies.

By creating an infinite and affordable source of fresh water, dH2Ome lays the foundation for a better society: drought-area dwellers will not have to travel long distances in hazardous areas to access water. And without the problem of the water crisis, they will be able to take care of themselves and their families, start small businesses or continue their studies.