An English study speaks volumes: the possibilities of life formation, and the quantity of its bases around the planets, are 100 times greater than we thought.

Three of the large organic molecules necessary for the formation of life have been detected around the stars at a level up to 100 times higher than that predicted by the models.

Analysis of the unique "fingerprints" in the light emitted by the material around young stars revealed "significant reservoirs" of large organic molecules needed to form the basis of life. Results that speak for themselves: the chemical conditions that have produced life on Earth are much, much more widely throughout the Galaxy.

Let's start with the basics

Astrophysicists led byUniversity of Leeds, in the United Kingdom, have identified the large organic molecules in the protoplanetary disks surrounding the newly formed stars. Such a disk would once also have surrounded our young Sun, then forming the planets that now make up our Solar System. The presence of these molecules is significant because they are, as mentioned, important bases. "Springboards" between simpler carbon-based molecules such as carbon monoxide, which is found in abundance in space, and more complex molecules needed to create and sustain biology.

The team, in collaboration with scientists from 16 other universities around the world, collected data from theAtacama Large Millimeter / submillimeter Array (ALMA). This cluster of 66 parabolas, built in the Atacama Desert in northern Chile in 2013, is the world's most expensive and powerful terrestrial telescope to study the Universe at submillimeter and millimeter wavelengths.

Where are the ingredients of life

“These large, complex organic molecules are found in various environments in space,” he says John Ilee, the researcher who led the study. “Laboratory and theoretical studies have suggested that these molecules are the 'crude basis' for building the essential components in biological chemistry on Earth. They create sugars, amino acids and, under the right conditions, also the components of ribonucleic acid (RNA) ”.

However, many of the environments in which we find these complex organic molecules are quite far from where and when we think planets are formed. We wanted to understand more about where exactly and to what extent these molecules were present in the birthplaces of the planets.

The power of a magnificent telescope is a revelation: the basics of life are 100 times greater than expected

By combining its network of over 60 antennas, the ALMA telescope can detect very faint signals from molecules in space. Each molecule emits light at distinctly different wavelengths producing a unique spectral "fingerprint", which allows scientists to confirm the types of molecules and study their properties.

"The power of ALMA has allowed us to measure for the first time the distribution and composition of the material that is actively building planets around nearby young stars," says Dr. Catherine Walsh, study co-author. "The telescope is powerful enough to do this even for large complex molecules that are the basis of life."

What did the team look for?

Protoplanetary disks, all bearing the signatures of the formation of planets taking place within them, range between 300 and 500 light years from Earth. The research team looked for three molecules: cyanoacetylene (HC₃N), acetonitrile (CH₃CN) and cyclopropenylidene (c-C₃H₂).

We have found larger organic molecules than expected, a factor of 10 to 100 more, located in the inner disks on scales of the Solar System, and their chemistry looks similar to that of comets in the Solar System.

The key result of this work shows that the seven foundations needed to seed life on our planet are also found around other stars. Even more than here. “It is possible that the molecules needed to initiate life on the planets are readily available in all the environments that form the planets. environments, ”says Dr. Walsh.

For their next work, the researchers want to investigate whether even larger and more complex molecules exist in protoplanetary disks.

"Having found molecules like these in such abundance, our current understanding of interstellar chemistry suggests that even more complex molecules should be observable," says Dr. Ilee.

We hope ALMA will help us find the next stepping stones to chemical complexity. If we succeed, we will be even closer to understanding how the foundations of life can be assembled around other stars. 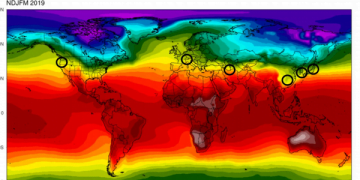 Canadian study: Climate and latitude have no effect on coronavirus

A rigorous Canadian study overturns all the precedents: neither climate nor latitude affect the spread of the coronavirus.